Why are my 'Invalid Flag' flags not considered 'helpful?'

So, occasionally, when I look through /tools, I see a perfectly useful answer that has been flagged as Not An Answer, or which has a Very Low Quality Score. Typically, I will make use of the special /review option to flag these as Invalid Flags: 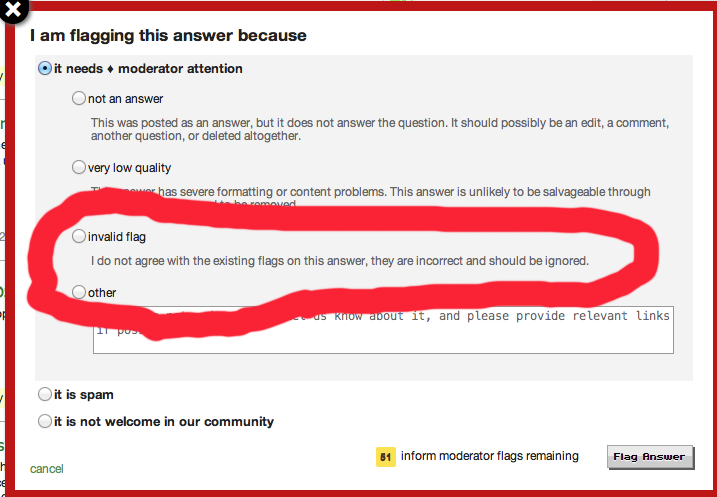 This morning, I used this option to counter flag one set of Not an Answer flags, on this very helpful, if not direct answer by Yx., and a Low quality flag on this useful contribution from a new user.

I was looking at my flag history a few minutes ago however, and was surprised to see this:

Neither of these answers were deleted, or in any way actioned by a mod, as well they shouldn't have been. (Though Grimrocks answer did get a helpful readability cleanup by another user.) So then, why have the flags been Disputed as not helpful?

So then, why have the flags been Disputed as not helpful?

Well, they haven't been marked as not helpful. They've been marked as disputed, which exists as a neutral state between "helpful" and "not helpful." Since your flags were countering the existing flags, the system considers the interaction a draw from the perspective of flag weight (hidden as it may be).

The interface is admittedly a little unclear here, as it may seem to be suggesting that your particular flag was disputed after casting. In reality your flag caused the flags on the post to be marked as disputed.

As a side note, a Very Low Quality flag will be marked disputed following an edit on the post, since if someone was able to edit (and hopefully improve) the post in question, the indication that it was unsalvageable was likely incorrect.

Not the answer you're looking for? Browse other questions tagged support flags .

23
On quality, answers, and the task of moderators
13
Am I using the 'very low quality' flag wrongly if the reason is because the answer is an exact duplicate of a previous one?
9
Conflicting flag messages around duplicate answers, how to proceed?
18
Can we have hints for [image]s and [video]s in the Flagged Posts tool?
7
Does length of answer necessarily denote low quality?
15
Obsolete comment flag handling
5
Do we need a flag/close option for questions asking for people to befriend or play with them?
1
Should I be flagging "incorrect" comments from flags or reviews as Not Constructive?