How do we widen our range of games?

In this question, it was asked whether we had too many SC2 questions. The consensus was, of course, that the amount of SC2 questions was fine, and the problem was a lack of other games.

However, I didn't realise how bad the problem was until tzenes posted this graph: 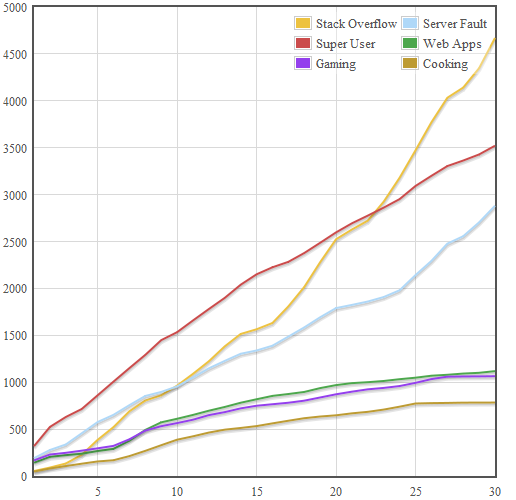 So, why is our growth comparatively low? Just looking at the relative size and enthusiasm of gamers vs sysadmins, we should be leaving Server Fault in the dust.

I think, the problem is that we are currently too narrow. We have tons of questions, and good answers, on Starcraft 2, and Dwarf Fortress.

But this is like a Stack Overflow composed entirely of C# and C++ programmers. What about the Ruby users? The PHP coders? Etc.

Or in our case, what about the WoW players? The Sims players? The Pokemon players? These are all large communites, with large amounts of technical details that people surely have questions about.

The reason it was so easy to attract the SC2 and DF users was because they had nowhere they had to get answers. SC2, being a new game, had no established communities (other than the SC1 sites), and while DF had a community on the official forums, it wasn't a good place to get answers.

But, for other games, there are established communities, like the ones I linked to. So, how do we attract these people here? The sites they are at aren't cape wearing supervillains, so even if they hear of this site, they're likely to just go "meh" and move on.

It seems to me that as this site grows with respect to the information it contains, it'll grow in two ways. Volume of questions on popular games has already been covered: I can see several questions on games that were launched after the site was, and I don't think this site will have trouble finding more.

The other way is number of games with questions. It's not necessarily going to grow the site as much as having key answers for SC2 will, but there are always going to be people picking up games that are 2 or 3 years old (or older) and looking for answers about them.

So, to answer the question, I'd say that we can help by posting questions about those older games as we play them, and by trying to help answer questions about older games as we can. I'm not suggesting that people should dig up copies of Elder Scrolls: Arena or anything like that, but if you're still playing Oblivion (or Morrowind), you can think about appropriate questions you can post.

Personally I'd say this is a very natural thing given the moment this site launched.

Just two months after E3, normally no AAA titles are released until the end of September, so they can get attention before the holiday season.

Starcraft 2 however, is an exception and actually quite predictably for Blizzard, so they can take all the attention when there is little competition. However, the upcoming season means releases for some highly anticipated games. Here's a sample just for the next month or so:

I'm sure quite a bit of our current users are also going to give one of these a try. So I'd say: give it a month and hope that some of them will lead to a surge of questions (and answers)

Now, if we remove the original three from the equation, you'll see it's not that bad. (the three had a dedicated launch, and questions moved, while we're also competing indirectly against other area51 generated sites.)

What we've already proven is that we're able to cater the new games, and provide a place for existing games.

During the time we're in beta, only one single big game has been released, and we're answering the questions for it.

I expect we need more new big games to release, for us to grow significantly, and as a result, show our value to existing communities.

I want to see how the holiday season goes, I expect some growth there.

Honestly, this is a market where growth could be exponential. I'd argue that with the popularity of SE and gaming anything less than that should be considered a failure. With that in mind I look at the chart and I see it becoming linear in growth.

I've thought about this and I've come to a conclusion. The way this site is run is destined for failure. Everyone wants expert gamers answering expert questions but, in this desire they lose the ability to see what the market for gaming actually is and how continual growth is a good thing. What percentage of gamers are actually experts? I'd argue less than 15 percent, based solely on how many gamers I have played with in the last 25 years (I'm willing to call it fair representative sample). How many of them will actually come here? Not many. Why? because most of them already have their niches and cliques.

At this point this site comes across to me as: "You can come here and lay your question down before the top 10 of us and if we deem it wise enough we will permit the possibility of an answer." This isn't just me either. I've had friends that used to come here, they actually committed to the beta when I did. They are long gone because of how questions were being closed and how they disliked the mentality and usefulness of this site (their words). On that note, I think I am leaving with that too. I do not wish this site to fail, I thought it was a great idea at first but, it appears to me that unless the direction of it is altered to what a community will actually flock to then failure is inevitable. And I am too busy to be on a failing project.

1
Are there too many StarCraft 2 / single game questions?

5
How should we approach recommendation questions containing real technical problems?
11
Appeal and discussion for "How Can We Get More Players on Our Server?"
5
How to deal with duplicate answers for Skyrim/MW3 questions?
5
Questions regarding established metagame
21
What do you do when a question is asked which is a collection of other asked questions?
13
Questions about player behavior in Online Games
7
Should we intentionally seed questions for new games?
20
Is anyone on the site still playing new AAA games?