Should we have a flag for answers which failed to realize a question's scope?

I am really new to the Stack Exchange community and after reading several answers, I seem to come to the same conclusion; that some fail to realize the scope of the question.

Now I'm unsure as to whether I misunderstand - like, whether or not there is another way of approaching this situation - but it seems as though the only real way to let an answer-writer know that they didn't read the question correctly is to comment on it. However, a flag would allow (maybe?) the answer to be filtered to the bottom of the question and allow new users to see how not to answer questions (this of course being more relevant for larger question threads, but I'm sure there could be other uses for this).

For an example of an answer, let's take a look at this question: Which house is the best investment to build up money?

Now it's clear to see that the accepted answer is beautifully written and quite a rigorous answer to a simple question. We can also see that the second answer is nowhere near this quality level, which is most likely a result of not realizing the scope of the question.

I'm not suggesting this as a way of punishing users for not understanding a question, I'm merely suggesting a way for users to understand why their answer wasn't voted for. In the given example this is obvious, but it might not always be so obvious.

I suggest that this be a passive flag (meaning it doesn't necessarily mean the user needs to be punished, merely monitored) that will, in a way, allow users to not only vote it down for it's irrelevance or whether the answer is incorrect, but also allow the user to flag the post for moderators to see that maybe this user needs help. This will then allow the user to learn from their mistakes and perhaps encourage them to rethink their answer and edit it to realize the scope of the question better.

I go through a lot of questions just to read and see how other people answer questions, and I see a lot of people who tell people that they didn't read the question properly. I feel as though this takes up too much time and is really negative because the user would feel they are being 'hated on' in a sense. This flag would be a way of quickly doing this and also would be good for the user because instead of getting direct hate, they could instead see a 'tally' of how many people think they didn't read the question properly.

I understand that a lot of users just want to help and they don't mean to read questions incorrectly, so this would be a simple and (hopefully) effective way of reducing hate and misappropriated discussion in the comments and instead allow for community discussion to help the user understand the questions they attempt to answer better.

I don't necessarily expect this to be added, however I would like to hear some discussion as to why or why not this might be a good feature idea. Please share any and all feedback for this idea.

This is something that more or less already exists in another form; it is what downvotes are for. As users cast their votes, answers are sorted according to score. The best answers rise to the top, while poor answers fall to the bottom. Answers with the same scores are ordered randomly every time the page is loaded.

Answers that are significantly down voted are even subject to being faded in order to better indicate that the community has determined "The answer is not useful" (at least, in the default theme). The threshold for the fading to occur seems to be at a score of -3: 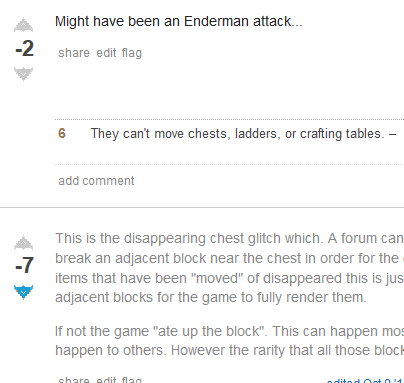 Additionally, each downvote on an answer will remove 2 of the poster's rep (at the cost of one rep for the downvoter) until/unless they have the minimum possible 1 rep. The loss of rep is reported to the user's top-bar and user page, where the can see the sources of their gains or losses. 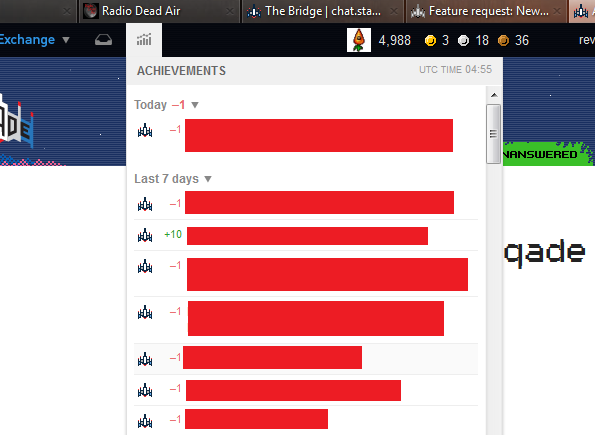 Exactly how much an answer gets downvoted often depends on the popularity of the game/subject matter in question. For example, in your example question ("Which house is the best investment to build up money?"), I personally have up-voted the accepted answer because it clearly displays a wealth of research and effort (and the math involved checks out). I have not, however, downvoted the other answer because my understanding of the game in question is next to nothing (aside from what little I've gleaned off the tag-wiki and the aforementioned accepted answer), so it doesn't quite cross my personal threshold for assigning it a negative value.

As it stands, any comments we currently make on answers that leave something to be desired are fully optional (be aware that there are automated comments that are posted as higher-rep users go through the various review-queues), and are generally used in this context to suggest ways of improving their answer, or that they might have mis-understood the question.

Adding additional flags to this process, I feel, would just complicate things further than they need to be. Adding to moderator and high-rep user workloads of flags to sort through, while really only having the effect of sweeping a bit of dirty laundry (commenting on why something was downvoted) under the proverbial rug.

If we notice a pattern of a particular user having a habit of posting things that are heavily down-voted (and we do notice!), and they aren't listening to or are being actively hostile to constructive criticism, it will often be brought up in the site's main chat for our moderators to take action on, assuming they haven't already noticed the pattern and taken action.

18
Should we flag gibberish answers as spam?
5
Is there a way to send private message on gaming?
8
Why are my 'Invalid Flag' flags not considered 'helpful?'
6
Flag quantity refilling?
10
Should I flag an answer that isn't relevant for the question as “not an answer”?
9
When should I flag an answer and what flag should I use?
2
Should posts that are flagged should be examined more thoroughly?
19
Why we should make a flag reason for closing modded Minecraft tech support questions