Why was my edit rejected as incorrect?

I recently submitted an edit suggestion which was promptly rejected.

The edit was rejected under the pretense that port 27016 is the default and not, as I had suggested, 27015. I don't know if anyone else has tried running a ship server, but the default port, assuming you make no effort to change it is 27015. I can confirm this with complete certainty as I am currently running a server on that port, with that port forwarded and my friends and other, random players have successfully connected.

When I first launch up the server, thats what I see in the configuration panel. 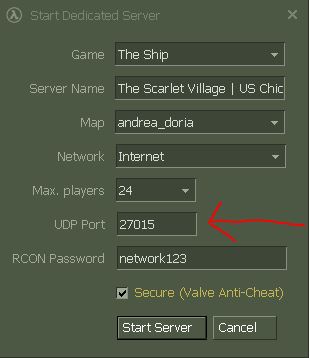 When I check the config, that's the host port.

So why then was my edit rejected? Should I resubmit the edit or will it just be rejected a second time?

I'll pop in here, as one of the people who rejected. But, before I explain things out, I'll just leave this here link to a fairly good explanation why I chose to reject. It's already been mentioned in the comments, but I want to relink it, because it's really the core of why I rejected the edit.

In short, your edit wasn't a matter of style, or fixing typos; you were fundamentally changing the content of the answer. And that's generally not cool. If you think an answer is wrong, you can downvote it, you can comment on it to let the answerer know, or you can post your own answer, none of which were things you had tried prior to suggesting the edit.

Now, that's not to say that I'll always reject edits made primarily for correctness; if this were a long-accepted post, with dozens of upvotes, with both the question asker and answerer not having been on the site in months, meaning the answer is likely to stay on top no matter what, and you had already tried commenting about the issue, and other people had all agreed, and you had mentioned in the edit description something along the lines of "Fixing port number as per agreement in the comments", I probably would have double-checked the comments, and whacked the accept button. For a brand-new answer on a brand-new question, where the answerer had themselves admitted they had no way to know if it was correct? Downvote, comment, and/or leave your own answer. Especially since, as the asker, you can un-accept the given answer pretty much any time, if you feel it's incorrect.

(At least, that's my thoughts on the matter.)

If your information is correct, you could choose to source it, then resubmit it. OR, you can always post it as a separate answer of your own. (The second choice is preferable).

Not the answer you're looking for? Browse other questions tagged discussion specific-question .

5
Why do people destroy helpful edits to answers?
1
Rejected edit attempting to fix quote from a wiki page