Something I've been seeing a lot lately is that a question or answer will have a problem. Someone will leave a helpful comment telling the person what's wrong. Great! 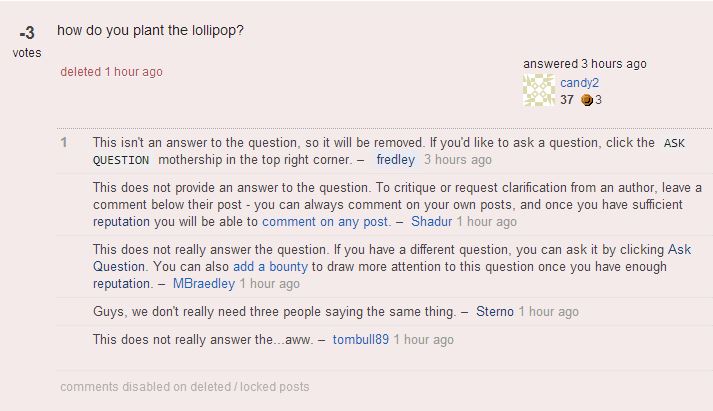 The problem arises when two or three more people arrive and say the same thing. Even when done politely, as in the example above, it can make a user feel ganged up on. When not done politely, it quickly becomes toxic.

If this is maybe happening from the review queue, consider checking first to make sure someone hasn't already left a comment. +1 that one.

To be clear, I'm not saying you're an awful person if you've done this. I just think having a single critique rather than a bunch will be a more pleasant experience for a new user and be less likely to scare them away.

2 of those comments (mine and Shadur's) come from the review queue. They stay around after the post has been deleted so the poster can see some feedback. In order for the poster to be able to see, for instance, fredley's comment, they'd need 10k rep, which for the vast majority of users who have their answer deleted isn't the case. Using the review queue auto-comments are important for this reason.

I have even gone so far before as to comment on an answer almost immediately after it was posted (while at the same time flagging it), and then, when it eventually shows up in a review queue, leave an auto-comment as well. I see no way around doing this, unless there is a change to the auto-comment system that would essentially allow an existing comment (in the above case, fredley's comment) to be promoted to the level of the auto-comments, such that when the post is deleted, it remains as the explanation of what the user did wrong.

As for having multiple auto-comments, perhaps I was in the wrong in this case by selecting a new one. However, in my defence, occasionally it's difficult to decide which auto-comment best fits the situation. I disagreed with Shadur, and so decided to use a different one.

19
No need to be afraid of flagging
3
Why do we leave "Welcome to Arqade" comments on answers that we're about to delete?
55
Please, please, please, don't edit out spam links
58
Please don't leave redundant comments on non-answers
63
Please don't misuse the voting system
59
Let's be nice to each other
1
Is there a way to see a list of comments I posted?
8
What's the best way to handle comments that answer a question?
16
Can (should) new users be able to answer their own questions?