Should we be closing questions that involve software that is illegal to distribute, but legal to download?

Recently a question has been closed for asking about some Obsidian client for Minecraft on SevenSidedDie's assertion that it was used to bypass Minecraft's DRM. The askers claims that it does no such thing, to which SevenSidedDie replies: Regardless, it's illegal to redistribute Minecraft binaries. That makes Obsidian a pirate copy of the game even if it's innocent of the rest.

Now, I've never used that client, so I can't tell where it does indeed circumvent DRM or not, but if it doesn't, should we be closing questions about using software that is legal to obtain just because whoever distributed the software broke the sacred EULA?

Redistributing Minecraft binaries is not just a violation of Minecraft's Terms of Service. More relevant to us is that it's very much the definition of a pirated copy of a game: it's a copyright violation. Minecraft's ToS is simply redundant with copyright law: without a license, only Mojang AB is legally allowed to distribute Minecraft binaries, in original or modified form.

For the curious, here's what Mojang says about redistribution:

The One Major Rule

What You Can Do

If you've bought the game, you may play around with it and modify it. We'd appreciate it if you didn't use this for griefing, though, and remember not to distribute the changed versions of our software. Basically, mods (or plugins, or tools) are cool (you can distribute those), hacked versions of the Minecraft client or server are not (you can't distribute those).

Now that's pretty clear: original or modified versions of the game are specifically called out as not being distributable. Because copyright law also forbids that, it's even more solidly obvious that Obsidian Client is illegal. The only way it would be legal is if Mojang used their copyright rights to give permission for redistribution, and they're explicitly saying they are not giving that permission.

(Fun fact: Minecraft's ToS actually adds no new restrictions that aren't in copyright law already. The ToS actually gives us more rights than normal copyright would by default, because Mojang went out of their way in the ToS to give us the right to mod the game and distribute mods, which are normally not permitted by copyright law. The ToS doesn't need to be enforced by us, since copyright law is already more restrictive. Our policy of rejecting questions about games that are copyright violations ["pirate copies"] is already enough.)

I appear to have interpreted its feature list wrong about circumventing Mojang's server authentication. (The descriptions around the hacks sites are not very good, and I wasn't about to download it to test it.) That doesn't impact the fact that it's a copyright violation to distribute or obtain Obsidian Client. Since it's simple piracy, such questions need to be closed.

For science I downloaded Obsidian Client and opened it up to see what it includes. This is what I found: 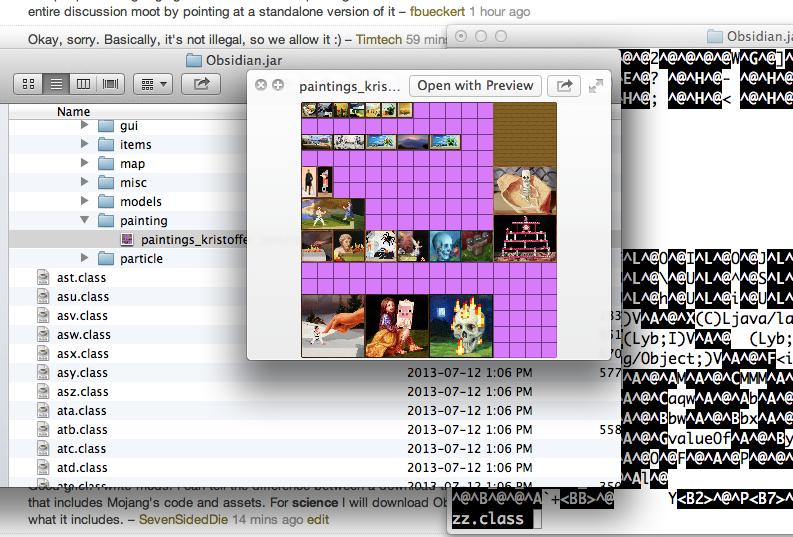 For further science, I copied the Obsidian/ folder containing Obsidian.jar and Obsidian.json directly into my versions/ folder without touching any official Minecraft jars – just a drag-and-drop into the versions folder. I created a new profile, and it let me choose "Obsidian" as the version. It ran. For extra fun, the menu is missing the usual "Coyright Mojang AB. Do not distribute!" text.

So Obsidian Client is exactly what we mean by a "pirate copy" of a game that we don't accept questions about. There's no way to obtain and install Obsidian Client without also downloading Mojang's proprietary code and game assets. It also happens to contain modifications, but it would be a pirate copy even without any modifications, and that it does contain modifications actually makes it "less" legal, since then it both violates copyright law by being an unauthorised copy, but it also violates copyright a second time by being a derivative work. Both those things fall under our colloquial use of "piracy".

If it also happened to circumvent account authentication (which I wasn't about to test using my account!), it would also violate the DMCA, for a third way it breaks the law. Whether it does or not though, it is a pirate copy in two ways already. Maybe a third, but two is twice too many already.

I think we should treat this type of questions as usual.

If the Question and Answer is the same, no matter the source it came from, (legit or non-legit,) treat them as if it came from a legit source. (and make edits to the question where needed.)

If the Question is clearly impossible to disconnect from piracy, it is not welcome on the site.

Regarding this specific question: Obsidian is a minecraft client for the sole purpose of (multiplayer) hacking.

We can compare this question to a questions for a tutorial on how to use a external cheat program/trainer or a no-CD crack, which is also not welcome on this site.

Excuse my humble self but to use this Obsidian Client requires a Mojang account, $27 or £20. Also, the Minecraft license allows for redistribution of modifications. Lastly, clients like Obsidian and Nodus are greatly encouraged on Creative servers for the use of the "Build" commands. It's up to the server owners to decide whether they want to let certain players use clients and nods. Obsidian is not an all-out hack. It has Optifine, Rei's Minimap, and Build.

This is a modification of a game. It is not possible to use it without buying Minecraft first. Hence it's not illegal.

42
When does a question "support piracy and pirated games"?
12
What's our procedure for asking about not-quite-legal games?
3
Do we allow questions about unofficial game releases (fangames)?