I've been going through the flag queue a lot recently and it seems that we get lots of non-answers (comments, other questions, etc.). I see a lot of helpful comments on these posts talking about rep required for the commenting privilege and so on, which is fantastic.

However, on some posts there are 2 or 3 such comments posted hours apart. Besides being redundant this comes across very negatively to me, and I can only imagined how badgered a new user would feel seeing that on their very first post here. It's not a good way to greet new users.

As such, I think we should not do this. I've started flagging the extra comments as redundant ("obsolete") but ideally they would not be there in the first place. Please take a look at existing comments before you post another very similar one.

Of course, there may be some reason people are missing these comments and thus duplicating the info unknowingly. I can't think of one, but if you do please comment here so we can see if it can be addressed.

The third commenter should have used the (default) "No comment needed" option: 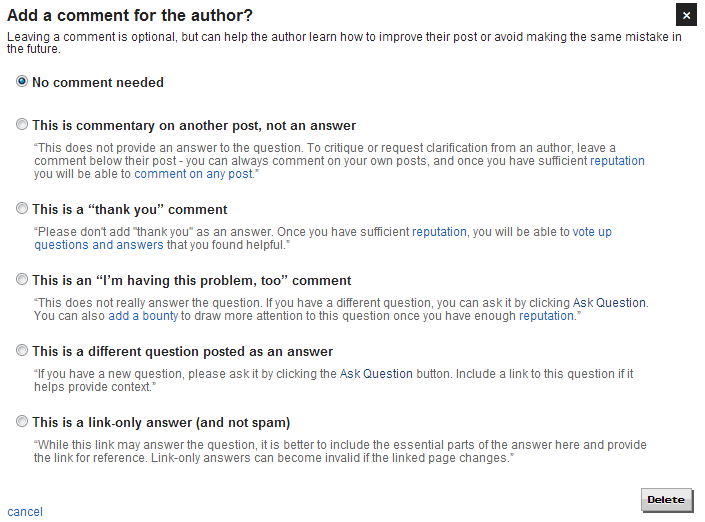 Just like posting an answer that adds nothing to the existing answers is meaningless, the same is true for comments. If you agree with the comment, that's what upvoting it is for. Obviously two people posting similar comments within a minute or two is not unreasonable, but hours apart seems excessive. No one wants their inbox spammed with the same thing over and over.

I think you have a point in general, but your specific example is pretty poor.

The second is a much simpler comment cutting straight to the issue. Sort of a TLDR for the first. Maybe not necessary, but certainly doesn't hurt to rephrase things. In fact, given how often new users don't seem to understand the advice they're given, especially the canned comments, a simpler rephrasing or two can actually be beneficial.

The third is the canned comment from somebody else flagging it. It would have been better to indicate that no comment was needed, but the user was probably thinking more about indicating their reason than about adding another comment. This, as well as the additional example Robotnik provided in the comments on this answer, leads me to believe we have more of an interface issue than a user issue. When you flag something, it asks you why you're flagging it. It's perfectly reasonable to expect a user to answer that question. They might not have even read the other comments to realize that someone posted a similar one already.

Not sure what the best way to fix that would be. Maybe the first flagger's comment could be linked to the reason somehow, so the system doesn't double it up.

I'm going to offer another dissenting view. I agree that the duplicated comments should be unnecessary, but I think they are a symptom of a system that is somewhat broken.

Casting a downvote on an answer costs reputation. As such, downvotes are far rarer than upvotes. This creates a tendancy across stackexchange for good quality answers to have very high scores, while bad quality answers either have very low negative scores or even low positive scores.

To give a hypothetical example, a user may post a poor quality answer which receives 5 upvotes. Another 20 users may have judged the answer as poor but only 1 of them was willing to spend the reputation to downvote. As such, this user goes away thinking "5 people thought my answer was good and that 1 downvoter is clearly in the wrong".

Similarly, if an answer receives a single critical comment it is easy to dismiss this as just the view of one awkward person. If it receives multiple comments saying the same thing, it is much harder for the user to dismiss.

Unfortunately, because comments are free while downvotes are not, the system incentivises posting criticisms in the form of comments. The correct solution is to remove the cost of downvoting and discourage duplicate comments. In this way, those second and third commenters have a legitimate outlet by which they can express their view on the answer. If you implement the latter without the former, we will increase the number of poor quality answers which lack negative feedback.

I'm going to go in the other direction on this.

There's nothing wrong with duplicate comments on non-answers posted by new users.

Important: I'm not saying redundant comments are good, I am saying they're not bad.

No, actually, the first comment should've been a cannedcomment, and the rest shouldn't have been there at all. Only mods' and canned ocomments reliably reach the owner of a deleted post, so if the user doesn't read the non-mod hand-crafted comments before his answer is deleted, he's not going to know what happened to his post. Perhaps an option to post canned comments whenever you see a post that is eligible for review would help with this problem.

Not the answer you're looking for? Browse other questions tagged discussion flags comments .

24
Please don't delete controversial questions immediately
144
A Close Vote is not a Super-Downvote. Please don't use it as one
63
Please don't misuse the voting system
10
Should I recommend deletion if someone else has already done so?
8
What's the best way to handle comments that answer a question?