I see a lot of posts on Gaming Stack Exchange that resemble forum posts. It is common to see people thanking others, adding an 'argument' as an answer, and even another question as an answer. Seeing how most gamers come from other forums to ask questions here, they might be used to a different format, style and rules of asking questions and joining discussions.

I would suggest that the FAQ should be mandatory checked before new users can ask questions. Other Stack Exchange sites such as Stack Overflow have users that are more likely to pick up on how Stack Exchange functions quicker than gamers.

As an example of what I mean, when you try to answer your own question, you get this dialog box : 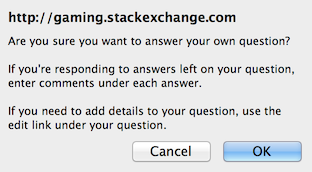 Why not incorporate this idea when posting answers for the first time? or every time until you get 10 rep? Some rules such as Answers must not be an added discussion, a comment or argument about the actual question or something along these lines. Might be a good idea, what are your thoughts?

Update: Has this issue been addressed? Or is it not considered an issue at all?

As Gaming Stack Exchange becomes more popular, more users will start signing up to ask questions, it might be a bit hectic for the community to manage all the errors that can result from new users' posts.

Would like to hear what you think about this topic and if it is an issue at all.

Note: I did not ask this to hint that moderators and the community are not efficient enough at moderating Arqade, it's a simple question I had in mind after I witnessed many repetitive mistakes by new users. This question is not meant to bash anyone's effort to maintain and moderate the site.

This might have been a useful question two years ago when Gaming.SE first opened.

Two years later, I think evidence has shown that there isn't really any need for any special ruleset in this regard. While it's true that we do get different sorts of problem posts than say, StackOverflow (if I had to guess, we probably get less spam, more outright vandalism), it's nothing that quality moderation hasn't been able to handle, and I suspect, won't be anytime soon.

Having said that, a lot of the useful information that is imparted in the Help Center is now prominently shown right where new users will need it - included along the right-hand-side of the 'Ask Question' page:

As you continue to fill out a question, this help info will change. There is also now a 'review' step, that the asker has to click through - making them go over their post one last time, before submitting the new question: 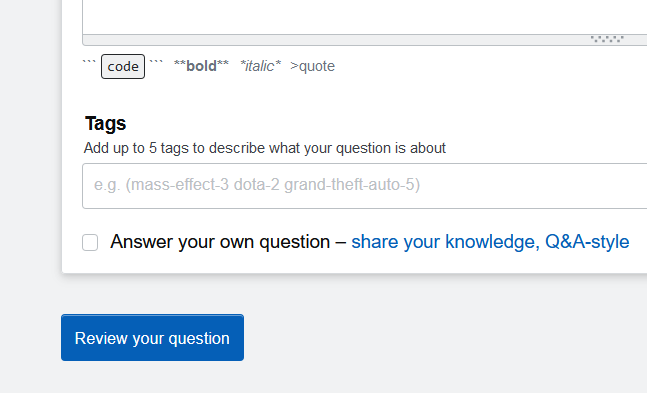 Not the answer you're looking for? Browse other questions tagged feature-request status-declined asking site-faq .

41
Make a special tag class for “game tags”.
8
Revisions of the Gaming site FAQ - on what we can actually ask about