What platforms of the Death Rally remake does [death-rally-2012] cover? It should probably be renamed or made a synonym if it's for all platforms

Does death-rally-2012 refer to the Death Rally remake for the PC released in 2012 only, or is it also for the Android and iOS versions?

From watching Youtube videos of the Death Rally remake on the iPhone, it seems that the iOS and PC versions are the same game. (Can anyone verify? I've only played the PC version.)

...which implies that they are the same game. If so, the iOS (and probably also the Android version) and the PC version should all be covered by one tag only.

And if they are the same game, then this tag should be renamed (or made a tag synonym of) death-rally-2011 or another better tag name instead to avoid confusion, as according to Wikipedia, it was first released in 2011 for iOS.

How do we define this tag's scope and usage, and what should be done about its name?

2011 probably is more accurate. However, according to Google Trends, Death Rally 2012 is a much more popular search: 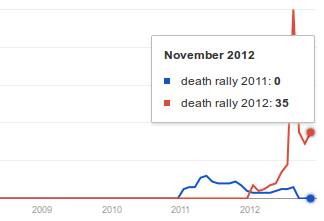 Also, that's what Metacritic and Gamespot call it, at least for the PC.

So I would say to keep the current tag, even if it's not too accurate for the mobile releases.
Regardless, death-rally-2011 would make a good synonym.

I think the game tag should refer to the game in general. If people need to specify a platform, they can add an additional PC, iOS, or Android tag to do so.

As for whether it's 2011 or 2012, whatever it's better known as is what it should be tagged with, not necessarily what is more technically accurate.

Not the answer you're looking for? Browse other questions tagged discussion tags tag-synonyms ambiguous-tags .

10
Lower or remove the tag synonym upvote restriction
3
Tag synonym request: [mtg-dotp-2012] and [magic-2012]
5
Dealing with tagging policy inconsistency for iOS games
4
How should we tag the Xbox 360 and PS3 versions of the same game?
13
How do we tag Terraria versions?
2
What should the tag for Walking Dead - Survival Instinct be called?
7
Rename [pes] tags → [pro-evolution-soccer]
3
Renaming [call-of-duty-black-ops-zombies] to [cod-black-ops-zombies-mobile]
12
Pocket Edition is now Bedrock. Why PE is not a synonym? When should the PE tag be used?
4
What should be done about the tags for the Retrocycles/Armagetron Advanced game?