I had some user's answer over here by a new member called ME3 fan.

I asked them to go through the FAQ and posted my own comments on what was wrong with the answer. But I could not quote the relevant section on how we want our questions answered? I could not find one. Needless to say the answer got two downvotes mine included.

The same question has another answer by Brodysseus downvoted by one with a comment by the OP.

I, in my ignorance posted a comment to read the FAQ since I saw the user's fairly new account.

My only two questions are how to handle this case? And how to get ME3 fan be a contributing member of the site? Delete my read the FAQ comment?

Or is it possible to have an answering guideline in the FAQ?

This question is not just about this particular answer/question.

Please take a look at this answer downvoted 3 times about How do I save Anderson?.

These are just plain wrong. No amount of downvotes will help them. They are by new users yoganta in this case and they have not returned since Apr 30 at 2:22.

Definitely don't tell answerers to read the FAQ: it comes off as curt and hostile (i.e., "RTFM noob") and, like you noticed, is more or less pointless, as the FAQ says very little about what constitutes a good answer.

A better resource is the "How to Answer" page, but all new users get a popup explaining what we want in a good answer when they start typing, which includes a link to that page: 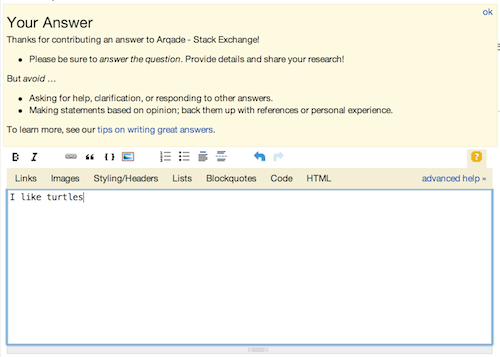 So when you see an answer that doesn't look good, all the relevant links in the world aren't going to help, because the user has already seen them. Either the user doesn't care or, perhaps more likely, doesn't understand why their answer isn't good.

So what can you do? Your minimum obligation is to do nothing: you don't have to deal with bad contributions. If you want, you can downvote an answer you feel is not useful (which you did).

If you're sure it's not even a partial answer to the question, you can flag it for moderator attention so they can look into deleting it (choose the "not an answer" option). Alternatively, or additionally, link the answer in chat to get the community to weigh in. You might even run into a number of users with 20,000 reputation or more, who can vote to delete bad answers.

You're not under any obligation or expectation to do anything more than the above, but if you do still want to leave a comment in addition to doing all those things, focus on what the user can do to improve the answer rather than what's wrong with it. Nobody wants to hear what they did wrong without any constructive feedback.

I think you mostly did that in your comment on the ME3 answer, but the "how do you think it answers the question?" and "does it help OP with his problem?" come off as a bit rhetorical: the answerer wouldn't have wrote it if they didn't think so.

And how do you think it answers the question? The vid you saw of a Geth ship desrtoying a Quarian ship was from before this decision was made. Does it add to War Assets? Does it help OP with his problem?

Can you explain a little more about why you think the Geth are a good choice? Does it add to War Assets?

In the case of the Anderson question, I think it was handled as best as it could be: the answers were wrong, and the comments explained clearly why they was wrong without resorting to any name-calling or impoliteness. Although some of us disagree, the current official Stack Exchange line is that answers being merely incorrect is not sufficient enough to take any more action other than to down-vote and comment, which is what happened.

23
On quality, answers, and the task of moderators

13
How do we handle duplicate answers?
58
Please don't leave redundant comments on non-answers
63
Please don't misuse the voting system
15
Answers that don't answer the question
21
How to get an up to date answer for old questions with obsolete answers?
2
Why is this a bad question? How could it be improved?
5
Are "this worked for me" answers, actually answers when they're concise?