How should we deal with rude comments?

In light of What about the new user experience here is turning people away? I thought the issue of rude comments should be brought up.

No, rude comments violate the Etiquette section of our FAQ.

Be nice. Treat others with the same respect you’d want them to treat you. We’re all here to learn together. Be tolerant of others who may not know everything you know. Bring your sense of humor.

That's not to say teasing or cracking jokes etc. are banned. But don't be clearly rude to anyone, and air on the side of not offending when you are unsure how others would interpret your comment.

How should one react to rude comments?

Don't engage. Don't upvote the rude comment. Remember even if a rude comment is funny to you it may be irritating to others. Telling off the rude user will only make matters worse. If the rude comment also says something useful (e.g. "Hey stupid butt, your question is off topic") consider adding a polite comment that contains constructive information instead and flag the rude comment for removal.

Is there anything I can do to get rid of rude comments?

Just flag them; there's a little flag icon to the left of a comment. Click it and select "rude or offensive" in the menu that pops up. 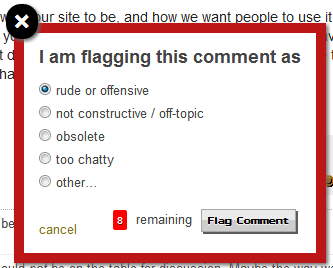 The comment will be flagged for moderator attention, a moderator can remove the comment if they agree the post is rude/offensive. However if 3 or more users total flag the same comment as rude, it will automatically be deleted. If the comment is very high scoring it might take a couple extra flags to automatically delete, but it only takes 3 flags to delete most comments.

Note that nothing bad can happen to you or even the poster of the rude comment when you flag. These flags are anonymous. By flagging a single comment you're not getting anyone into trouble, you're just helping keep the site a clean, civil place.

If you feel someone is being persistently and problematically rude, flag one of their posts/comments (or one of your own posts) with an "other" flag and explain the situation; a moderator can privately contact the user about persistent rudeness if they feel it is necessary.

51
What about the new user experience here is turning people away?
59
Let's be nice to each other

8
(How) should we discourage extended discussion in comments?
3
Clarification on comments policy?
5
How to deal with duplicate answers for Skyrim/MW3 questions?
58
Please don't leave redundant comments on non-answers
14
Using comments as answers