Should Arqade participate in Mario Marathon?

Mario Marathon starts on June 22nd. For those of you unfamiliar with Mario Marathon, it is an event hosted at http://www.mariomarathon.com. Their goal is to raise as much money for Child's Play Charity as they can. They do this through fan donations, made while they play through the vast collection of Mario games (Super Mario Bros. 1-3, Super Mario World, Mario 64, Galaxy, etc.).

Similar to the way our site promotions have certain milestones in which a new award is available, the guys at Mario Marathon have a system set up in which the amount donated directly correlates to their progression in the various games of the Mario franchise.

This is an event viewed by thousands of gamers worldwide, as the whole event is hosted on TwitchTV. Frankly, I feel this is one of the best venues for us to make an appearance if we wanted to increase site traffic, and content.

How will this help the site?

Simply: Every donation made has the option to affiliate your donation with a particular website. 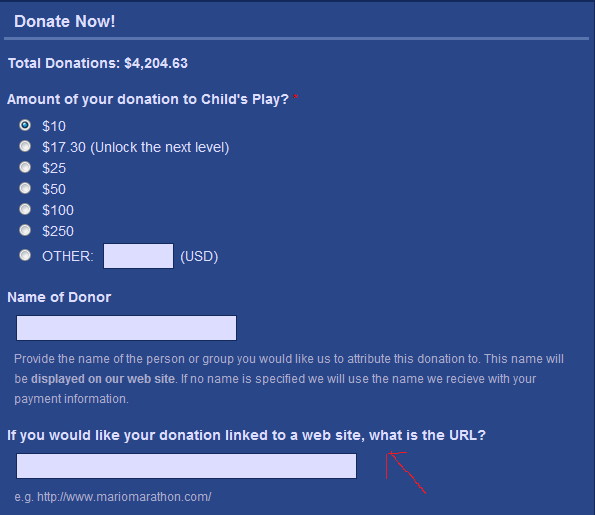 If we were to put our site in this box (whether it be https://gaming.stackexchange.com/ or our newly decided http://www.arqade.com/), it would be visible to anyone and everyone watching. Edit: The affiliation is determined by the site from which the link was originally accessed. Further donations should be placed from this link. Were we to donate a large enough sum, placing the website on each donation made from one of our users, we would have a chance of making it into the ranks of the Top 10 Contributors. 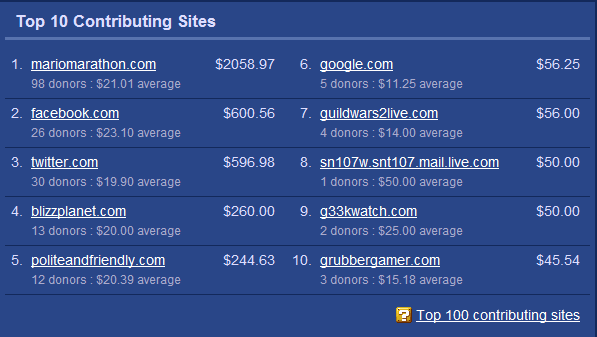 This is visible to everyone on the main page of the website.

I feel like this could be one of our biggest opportunities to increase site traffic, and get our name out there as a go-to source for gaming expertise (so long as they read our FAQ!)

Would this be possible? Or would the powers-that-be not be fond of us affiliating ourselves as such?

As I said in my comment, I really like this idea and it is ok with us if any of you want to make donations and put arqade.com in the URL affiliation. I looked into whether we can cover the donations, but unfortunately it will be too difficult logistically to do so for individual users.

That being said, we will match the contribution that you all make through Mario Marathon. Fluttershy and I have been in contact with the organizers of Mario Marathon, and here's how to make donations that will be affiliated with Arqade.com:

I noticed when poking about that they show a partner widget that would add a donate button the the arqade.com side of things. Even if SE doesn't want to make a direct donation this might help achieve the same advertising goal as is being talked about above.

The script is shown on this page http://www.mariomarathon.com/donations.html 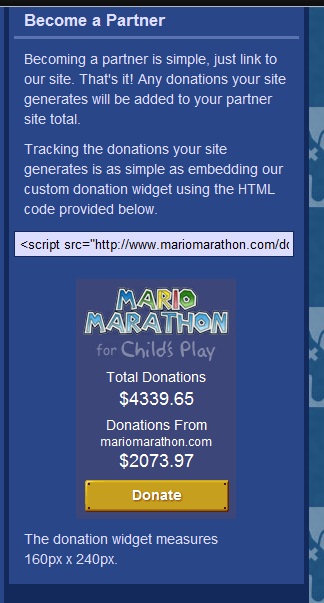 On a side note, I have sent an email asking if charitable receipts are being issued, which might help make a Stack Exchange donation easier, if they intended to make a donation at all, the reply to that inquiry is below. If someone from SE needs the email forwarded (for headers or something) let me know.

You should be able to use the paypal receipt e-mail you receive as a charitable receipt along with the Child's Play's Tax ID information:

If you have questions about this you should contact your tax professional or a Child's Play Charity directly at:

I hope you enjoy Mario Marathon this year, and thanks for your support,