Questions about characters across similar games

I can't seem to find anything in the FAQ that prohibits this style of question and it can have a definitive answer and isn't lengthy...but I'm seeing close votes on a question I asked (even though no feedback has been left as to why it might be/will be closed)...

Is it too close to "Identify this game"? or is it to open ended in that there could be hundreds of variations perhaps...

Here's a relevant bit of text from Chat.

For the record, I disagree with the voters, and would vote to reopen as soon as it goes through: 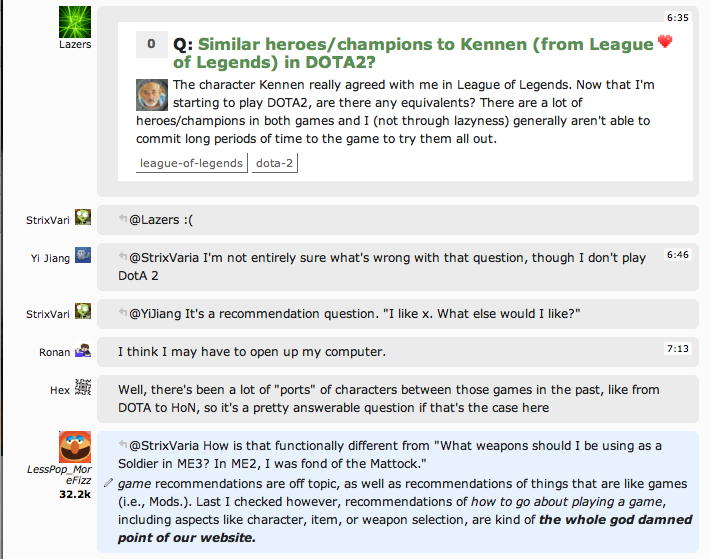 I personally think the question you have linked is a very good question.

In any case I disagree with those close votes. For the record I have never played any of these games, but I am familiar with their general concepts and their history.

I think asking rec questions within a single game (possibly series) is fine, but cross-game recs can get tricky. Try to use information from the game you are asking about. Comparing to other games is fine, as long as that other game is not the bulk of the content.

In the case of this specific question, I think it would be infinitely better if you described what playstyle you like in DotA and said "In LoL, I liked Kennan" as supplementary information. Having that as the sole fact is bad.

I guess the best way I could sum up my feelings is:

Don't rely on Game A to ask a question about Game B.

Note: I originally voted to close, but I'll admit I was jumping the gun. I am not suggesting closing questions that don't fit this admittedly vague standard. I am simply stating why it doesn't make a good question.

6
What questions should be in our meta FAQ?

7
Should this (kind of adult-themed) nethack question have been deleted?
2
Are questions not about a particular game off-topic?
3
Are questions asking for links to sources off-topic?
13
What should we do about these old Starcraft 2 build order questions?
4
Should we close ill-posed questions?
6
Is this question off topic because of the release date?
9
Handling these duplicate questions
6
Is my question about the purpose of a screen element off-topic?