All hands, please report to The Bridge

Can you guess which of these is the official, general discussion chatroom for Gaming.stackexchange? 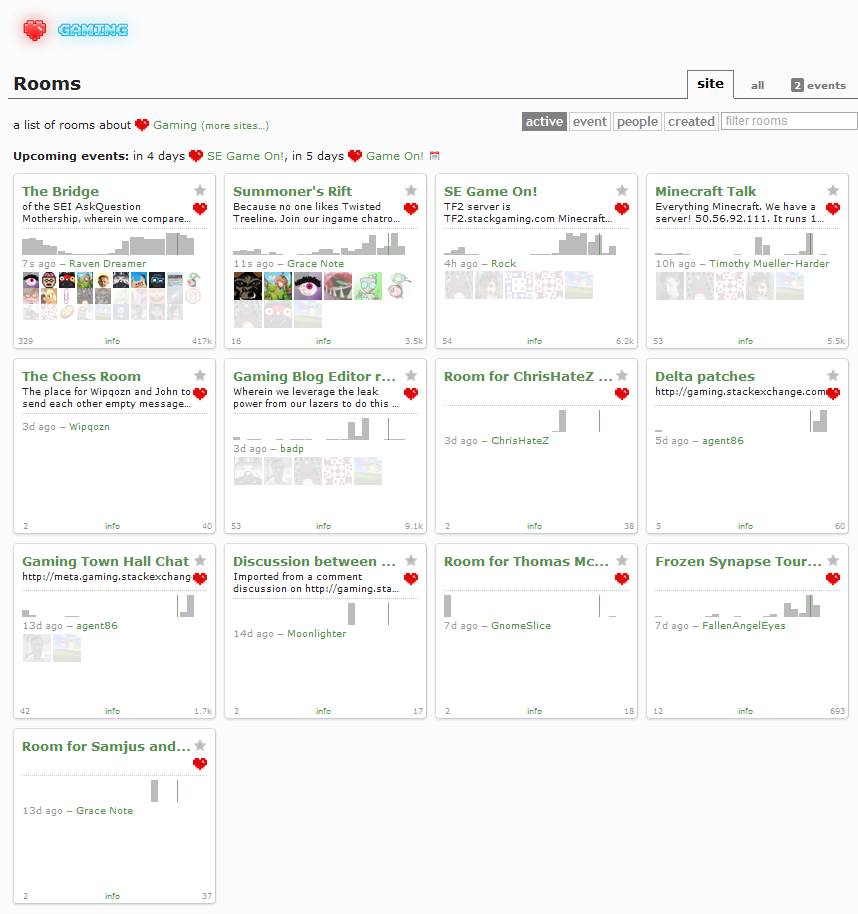 This is the view new users have the first time they click the "Chat" button from the main site.

There have been issues raised that new users have a hard time finding their way to The Bridge. When the chat button isn't being replaced by the blog, they still are greeted by this dizzying array of seemingly random rooms.

I don't think it's safe to assume that they will gravitate towards The Bridge. We may have more active chatters than most other rooms on the network, but if someone's unfamiliar with stackexchange's chat system in the first place, the fact that The Bridge has the most users might simply go unnoticed amidst the deluge of colors and gravatars.

The principle problem seems to be that neither "The Bridge" or its description are particularly intuitive in a way that announces "I'm the general discussion chatroom on Gaming.SE".

Since we can't poll the confused users themselves (unless they're browsing Meta as well, in which case, Hi!), I figured it couldn't hurt to poll everyone

Here's the current description of the room, for reference:

of the SEI AskQuestion Mothership, wherein we compare and contrast the relative merits of LASERs and LAZERS and their patented applications in diamond making and cat exercising.

And here's the outstanding question:

You're tasked with improving the description and/or name of The Bridge so-as to reduce new user confusion and make it more obvious it's the general-purpose gaming chatroom. What would you do? (Or would you feel the need to not do anything at all?)

I'm not sure it's necessary (frankly, I agree with badp that it's incredibly obvious which room has all the activity) but perhaps a very simple change to make it even more obvious:

General gaming chat room, wherein we compare and contrast the relative merits of LASERs and LAZERS and their patented applications in diamond making and cat exercising.

It would be nice if the SE network had some way to designate a primary to always show up in some special manner, but that's a request for meta.SE of course.

The very first time I tried to chat, I had exactly this problem. The chat interface was unfamiliar and despite the description of "The Bridge" making no sense to me, it had the most people so I ended up there. And I think my very first chat comment was to the effect of "What's this room for?" With most of the people in it being high-reputation users, and the name being "The Bridge", which implied to me a sort of "command center" idea, it made me think maybe it was a chat room just for the mods and other high-reputation users. So despite the activity, I didn't know if it was somewhere I was really supposed to be.

I don't think it's fair to say that it's "obvious" where all the activity is. Again, it's an unfamiliar chat interface. And even if you deduce it has the highest activity, it still doesn't tell you that you're in the right room. As it currently stands, the name and description are not clear or inviting.

General discussion for Gaming.SE. Come in and to discuss gaming or questions about the site!

For what it's worth, I care about a newbie-friendly description far more than I care about the room name. What's important is that a newbie can read the description and know "Okay, that's the place to go". This is not currently the case.

Just want to throw my 2-cents in here.

I think the best way to appeal to both newer and older users is to keep the name of The Bridge as The Bridge, and use a description similar to the one suggested by @Shinrai which starts off with a clear and concise sentence so new users know The Bridge is gamings main chat room.

I'd also like to point out that there are many other sites that do this already.

I honestly do not see a reason to change the name completely. Perhaps, like others have mentioned, adding a little something to the beginning of The Bridge's description to indicate that it is indeed a general chat might do the trick - I don't think we need to change the whole description.

If you look at the rest of the rooms, either the name or the description makes it clear what they are about. The Bridge doesn't, so I would (and did, when I first started chatting) assume since a) it has the most people and looks relatively active and b) none of the other rooms are remotely generalized in their purpose/description, that The Bridge is the place to go.

I think taking the name away would be silly, because other SE sites have non-specific names for their rooms - I don't see why Gaming has to be any different.

5
The Subjectivity Game
11
Gaming chat guidelines
9
Bridge Movie Night 3: The Search For Popcorn
17
So You Want to Attend Movie Night
9
Are we interested in getting spam reports to our chatroom?
14
This Is Fine is fine
8
Should we switch Lazers to only post Hot Network Questions in The Bridge?