On the coming murder of "dependent" and "meta" tagging 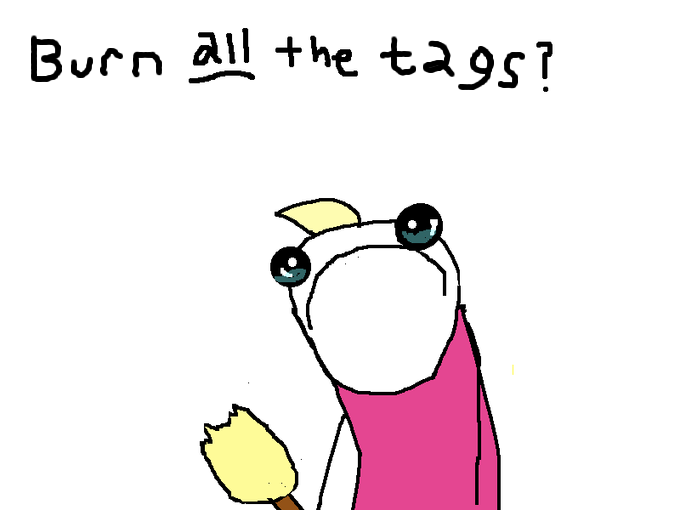 The winds of change, they are a'blowin. This week's meta-murder question is:

Have we not been clear enough that meta-tags are a Bad Thing™?

In her answer, Grace specifically calls out previous tag-burning parties I've held here on meta. In further discussing this with her, she said the following:

Excepting the obvious points like "meta", "ambiguous", "worthless", and "too narrow", the main thing is, if it isn't a tag you're going to subscribe to, does it create a meaningful categorization that people will enjoy in the subset within the game? If not, then it is likely to be bad.

I decided to go through a subset of the tags and try to determine if there was some subset of that subset of them that I could mark as meeting these criteria. Some tags are just clearly bad - they're things we close questions for, and they just should not exist. We've allowed a good number of other "meta" tags to proliferate though... I went through about 300 tags, and more than 60-70 of them seemed to qualify.

I was planning on posting all of them here, but on reflection it seemed like the kind of thing that would get me burninated rather than being productive. So I decided to do this first.

Here's the categories of tag that I've identified as being "bad" under what I understand to be the current "criteria for badness." I've also given a percentage estimate of what percentage of all the "bad tags" fall into this category.

"Non-game specific" questions are the one area where things get tricky. What if I have a genre question? Or a question about game mechanics in general? These tend to be broad questions and a limited percentage of the site's "good" questions land in this zone, although sometimes the ones that do are fascinating. It might make sense to have some "top level" tag that represents these "meta" (have I overloaded this term enough today?) questions.

My personal opinion on this subject is that we should make a decision about these categories, and make some kind of guideline or policy that we can use going forward in order to avoid disagreement among the site's "power users" and mass re-tagging later on down the line. What that decision is doesn't really make that much of a difference to me, personally. I'm doing this on a lark, and whatever happens, I'll just shrug and keep on keepin' on, so, please, don't shoot the messenger. :)

I figure that non "power users" submitting questions are likely to not follow the guideline, but at least if we agree on a policy, then fixing the tags should be easy for anyone with edit rights to do.

I guess the big, bold tl;dr at the end should be:

Are these things I've listed good criteria for selecting tags for further discussion and potential burnination?

For the ones likely to be closed, I think the tags should stay since we still need some tags for them, and I think there's one on-topic question for it that asks how to find more? Also, if a user actually thinks to use the tag and happens to read the description, then they might learn it's off topic.

The ones that are too specific should die. They may do this naturally though if they don't get two questions?

I'll skip the next one for now.

The genres are complete meta-tags left overs from before we knew how to tag them, mostly, and we've been slowly chipping away at them when they get bumped. These should probably just be burninated, but it might be useful when coupled with terminology?

When it comes back to the common gameplay mechanics across multiple games tagging we basically have three options: just the game(skyrim), the game and a specific aspect that you're asking about(skyrimweapons), and the game plus a game-specific aspect tag (skyrimskyrim-weapons).

In support of the first, you have the aspect that it's most basic, and it's how most of the other sites work. We'd then get the definition that it's only a good tag if someone follows it, and we'd just burninate them all.

The second and the third have the advantage that not everyone uses tags for following. Some use them for filtering. (e.g. Searching for [skyrim][weapons] to learn more about Skyrim's weapons.) Against each other: weapons has less of a mess like creating tag wikis for aspects of every game, it looks much better in the title ("skyrim skyrim weapons - How fast can you fire bows?" looks stupid.), and you don't have to worry about the tag limit.(saints-row-the-third-weap) The other has the advantage of not worrying about pushing the game out of the title, since it will always be smaller than the main tag, and it's a tag that people might subscribe to.

For what it's worth, Jeff supports tagging with only the game until games get a lot (maybe 500?) questions, then retagging them all to add a very specific tag (possibly like skyrimskyrim-swords?) to help make sure that it doesn't push the game out of the title.

Personally, I like the second option, but people seem to be killing most tags like that, so we seem on-track to do the first? The second kind of only works with game-tags, I suppose.

Do remember that people can sub-sort games by tags. For instance, I can click on Civ-5, and the on Achievements, which will show all things with both tags. It might be useful, as a result, to keep some of the tags in place that are useful on a multitude of games, even if people aren't likely to subscribe to the lower level tag.

63
A personal appeal to Jeff Atwood: Recent Changes to Gaming
28
Platform Tags are Useless
7
Have we not been clear enough that meta-tags are a Bad Thing™?
2
The "common game mechanics" "dependent tag" roundup 2012/01/24 edition
2
Why do we have a game-rec tag if it's off topic?
3
The "off-topic" tag roundup, 2012/01/20
1
How do you "Create" a tag, and should we create one for "Minecraft-crash" questions?

1
About fading of questions and tagging
1
Tagging those shmups with lots and lots of pretty bullets
3
The "off-topic" tag roundup, 2012/01/20
1
"Too Specific" tag roundup - 2012/01/20 edition
2
The "common game mechanics" "dependent tag" roundup 2012/01/24 edition
15
Sorting out the tagging mess
20
The Great Arqade Clean-Up of 2012
8
Player Two Press Burninate? Should we keep the [Multiplayer] tag?
26
What is the difference between historical trivia questions and identification or recommendation questions? And should they be allowed?