Why is a copy-paste of a Penny Arcade comic a legitimate answer to a question?

There's a pretty straightforward question about whether every item in Skyrim has a use:

Can every item in Skyrim be used for something? I find a lot of objects like ruined books, embalming tools, etc. that I haven't found a use for yet.

However, an answer with (30!) upvotes has been posted that completely avoid the question's premise (whether every item has a use):

If you can pick it up, you probably need it. 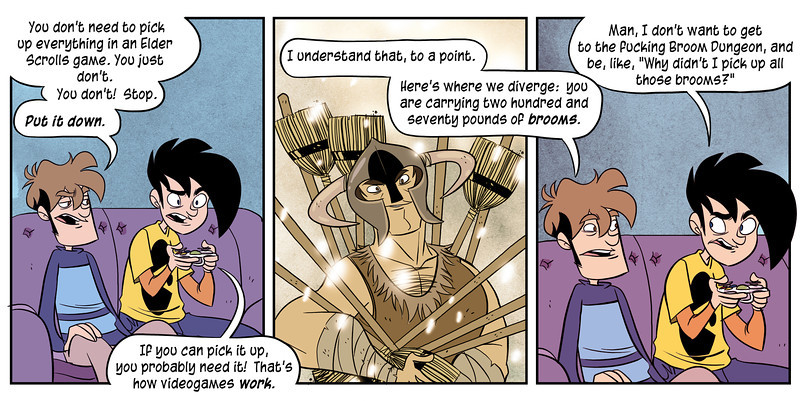 But seriously? Unless it has no interesting value, leave them be. You'll get one when you need one.

When flagged as "not an answer", it was declined as not having evidence to support the flag.

Why is this an answer to the question?

I think the answer is technically valid due to the last sentence, but it is a bit misleading and the punchline wasn't delivered well. The very first sentence in the answer is meant to be tongue in cheek but it is absolutely the wrong answer when taken out of context. If you just read that before looking at the comic or what follows (the big graphic tends to push things off of the screen so the last sentence may not show up1), you can arrive at the wrong conclusion.

IMO, the punchline works better if it was left in the end:

Some items in Skyrim are there for immersion and flavor. If it has no immediate interesting value, leave them be. You'll get one when you need one.

However, this possibility always exists:

There's nothing wrong with a bit of light hearted humor, and people appreciate that by giving upvotes. It just shouldn't get in the way of having a correct answer and I'm glad to see that the correct answer in that question was accepted.

1Just to illustrate, this is what I see by default when I click on the question. Basically, only the wrong answer shows up without scrolling. 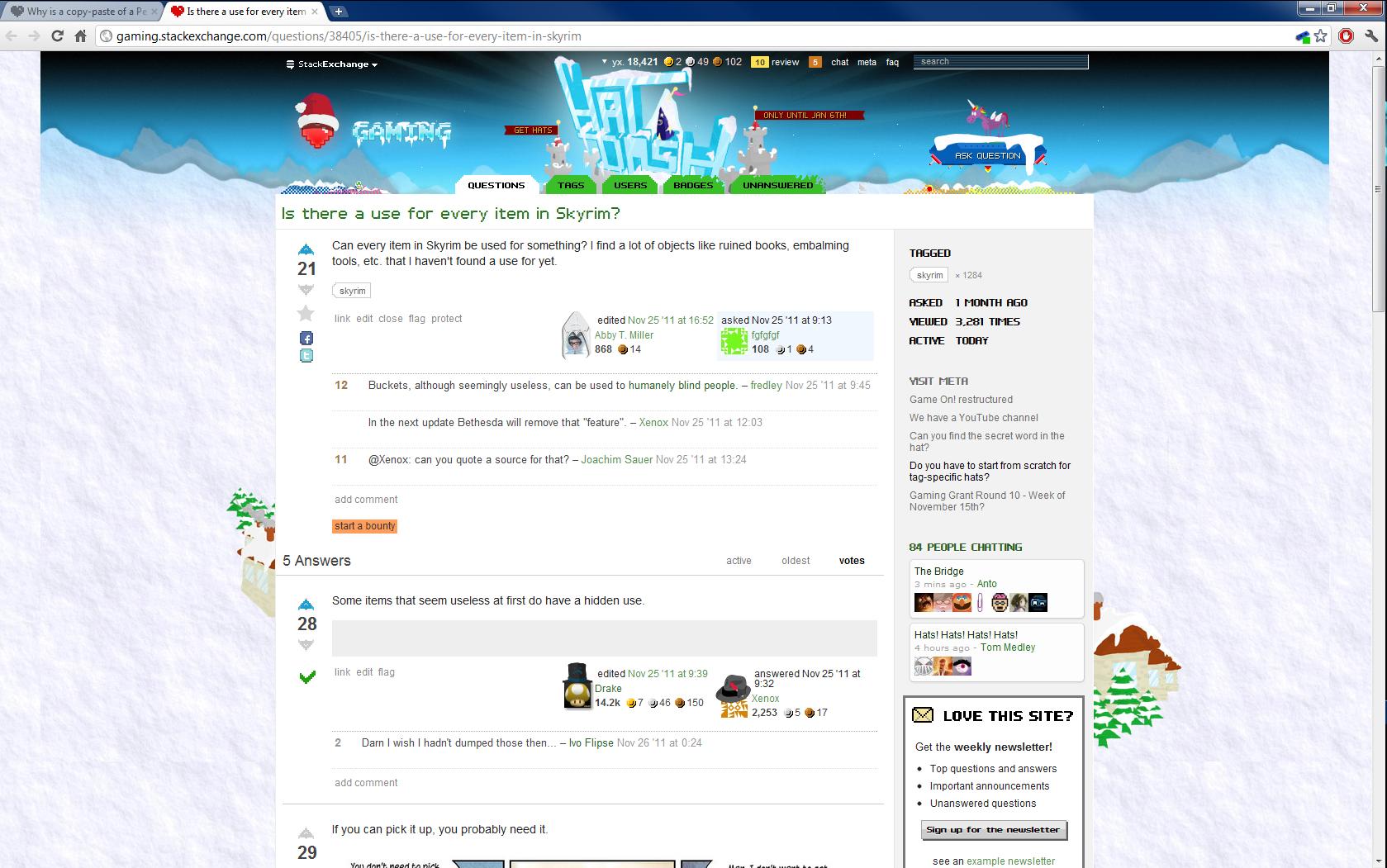 Disclaimer: I am the poster of the contested answer on gaming.se. I am also not a native English speaker, so I might not get all the connotations behind every word or sentence.

Good question, or should I say, good questions? Your post actually touches so many subjects it almost seems to consist of lots of different questions, all lobbed together. Since you also only pick one example, it kind of comes across as if you were attacking that specific answer, instead of touching a more general matter.

Still, the questions in themselves are valid:

Should every image (or more specific, comic) used in an answer be properly attributed?

While the particular image in question was non-modified and can easily be tineye'd to the original, and most gamers know what Penny Arcade is, I still think a few guidelines about images could benefit our community. Some proposals:

Is using an image as an answer acceptable?

Sometimes, an picture is worth a thousand words. On a question about MySQL injection, the XKCD Bobby-Tables comic really makes a strong point. Where needed, a few accompanying lines could be added to explain the comic (as was the case in your skyrim example).

As yx demonstrates: when another answer gets accepted, the image answer becomes just "additional" information - not even above the fold on the printscreen you can see. So the community and the owner can regulate: if there is a better answer, thanks to the StackExchange way of working, it will be shown first.

Is irony/tongue-in-cheek a valid way to construct an answer, or should the first/last paragraph summarize in all seriousness so no possible misunderstanding can occur?

This is a hard one. Irony is riskier when using a written medium, because much of the ways to communicate the irony are not available: tone of voice, facial expression... still, when brought well, I think in some cases an ironic/funny answer can be easier to grasp or remember than a neutral straight-to-the-point answer. On a question like "Should I use telnet to connect to root@mywebhost.com", an answer stating "Sure, if you want to make it easy to the world to see your root password and take over your box" might get the point accross.

One might argue that a last paragraph explaining that the post was meant ironic, could help the answer. Still, anyone can add another answer with this contents, or add it to the existing answer should it be accepted. In your example, the "But seriously" aims to make this clear - but maybe it was not clear enough for you?

I feel that the comic illustrates that you don't have to pick up all the items (if you just want to get on with the core of the game like Tycho) but "if you can pick it up, you probably need it" (if you want to be a total completionist like Gabe) in a fairly effective and humorous manner.

Sure, the answer doesn't answer the question directly, but it does in a way, so it's still useful, memorable, and humorous. From what I've found on the SE network, the quality of answers doesn't really correlate that well with the number of votes beyond a dozen or so. It's all just popularity.

12
Why is the answer always 'Bukkit'? (or: Mods in answers)
1
What should we do about existing extra long list answers?
9
List of Bedrock NBT workarounds to be posted as separate questions