A personal appeal to Jeff Atwood: Recent Changes to Gaming

This meta post is being made as per David Fullerton's suggestion.

We know you're very busy doing stuff, but I think many of us folks here on Gaming would appreciate some dialog from your end.

The moderators and regular gaming users noticed a couple of changes that you made last week, and we're... less than satisfied with what happened.

As far as I'm aware, this started when we had David Fullerton ask the core team to improve the way Gaming.stackexchange handled tags. This is not something new - we've been struggling with adapting SE's tag system to work with gaming (and requesting features to change it) for quite some time.

In response, it looks like you decided to take things into your own hands.

Last Wednesday (11/16/11) it first came to attention that you were performing some... radical changes to the site.

Some of these changes, like the tag synonymizing and removal of the [tag:murder] tag, was warranted (and probably long overdue). So, thanks for the help!

Except... you continued going, and went beyond what some of us consider helpful. There were a couple of tags in particular that many of us were, frankly, completely surprised to see vanished in the night.

These are things like bug (which was not even synonymized with technical-issues like several other of your merges), and even the story tag, which was created in response to a meta discussion in the first place!

We can understand a desire for more concise, clearer tags, but the result of this across the board removal left more than a few questions tagged with nothing more than the name of the game itself. (And if the games themselves are the only worthwhile tags, what's the point of using a tag system at all?)

Finally, you changed the way Gaming displays tags in the titles of questions. This action was startling enough to spawn its own meta thread and brings along issues of its own. (And why go out of the way to change one subsystem on Gaming and nowhere else? Isn't that the reason we weren't upgrading tags?)

As a community, we have two major problems with this series of events.

We want this community to succeed even more than you do! If you think there's a problem with tags, answer rates, or any other number of things, let us know! We're never going to be able to get the site to a satisfactory position if you won't let us know what you think is wrong.

So pull up a chair. Stay awhile and listen. And then let us know what we need to do better ♪.

First, I should apologize for not announcing the changes before I made them. You're right about that. But I felt the tagging issues had gone on for 6+ months with no significant action at all, and even worse, a technical programmer code "fix" to the entire Stack Exchange engine was being promoted as a solution to what was, and is, fundamentally an issue of community tagging norms on a specific site.

Adding a CSS !important element to our tagging engine is not the right way to solve anything. That's a band-aid, a nasty hack, treating the symptoms rather than the disease. This, I could not abide -- even though I am technically on Rumspringa right now.

And what is the disease?

The current tagging system is intentionally simple: the more popular the tag is, the more prominent it is on the question. To avoid conflict with generic tags, the key is not to add more arbitrary complexity to our tagging system across the entire network -- but to use as few generic tags as possible, because, well, see above. Omit Needless Words (and Tags), man.

So let's treat the disease together (overtagging, meta-tags), not the symptoms (gosh, there are four tags on this question, which one is most important?!).

What needs to happen is a strong cleanup of the zillions of meta-tags on gaming to make sure that the game tags aren't "fighting" with other tags. I've done a lot of work in this area removing the really obviously inappropriate meta-tags, I've merged and synonymized a bunch like freeze and crash into technical-support and I'll continue to do so. I agree that this is really work the moderators should be doing, and it is our failing as a company that we were not naggingeducating the community more about the peculiarities of the gaming site subject and how to make it work on our engine.

And if the games themselves are the only worthwhile tags, what's the point of using a tag system at all?

Why not just Keep It Simple and use the absolute minimum number of tags that are necessary -- typically, just the game title? When has "hey, let's do the simplest thing that works" ever been the wrong answer?

Finally, you changed the way Gaming displays tags in the titles of questions.

An integer value was changed from 1 to 2 to accommodate the fact that the game title might be the second tag on a question due to the peculiarities of this particular site, where every game ever created on any platform for the history of recorded time can possibly have its own top-level tag. (Compare with Stack Overflow, for example, where there are a considerably more finite number of active top-level programming languages).

All that said, I completely agree that I should have opened a meta thread about it first, and I apologize for not doing so.

In my defense, in the spirit of Wikipedia's Be Bold, we also like to encourage direct action to improve the site -- not next month, not next year, but hey how about.. right now? 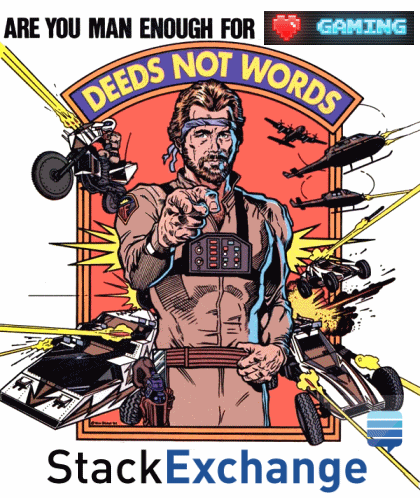 Although I continue to have reservations about gaming as a topic, you can plainly see by my activity history that I participate here in good faith here along with everyone else. Everything I do is intended to make Stack Exchange better, simpler, and ... more awesome.

43
Make a special tag class for "game tags".
8
Game-specific tags
19
Why are the top two tags being added to a question's title?
15
Sorting out the tagging mess
16
What are the best practices for tagging on Gaming.SE?
16
Whither [Murder]?
10
Why does Gaming.SE use tags differently from other SE sites?
-5
Cleaning up the game promotion grants
6
Avoid tags that mean different things in different games
20
Increase tag length limit to 30 characters
See more linked questions

5
What defines "retro-gaming"?
3
A world outside of gaming? Preposterous! But... it still needs a tag.
18
What are the expectations of the Gaming Promotional Grant?
7
Is there a listing of the recent changes made only to Gaming?
7
Have we not been clear enough that meta-tags are a Bad Thing™?
0
What's the policy on site-specific changes?
67
Stop removing tags that are only used once in the last 6 months
14
Cleanup 2014: It's time for burnination!
0
Can someone take ownership of the recent tag rename requests?
34
Should we add [minecraft] to the tag blacklist?