While we continue with distributing the games from Brett's Fall 2011 Gaming Grant, we're considering new directions to take. After some deliberation, and taking other suggestions from the community here into account, we've come up with the following scheme.

We will run each round of the Gaming Grant by opening a new Meta question, as before. The frequency is probably going to be something like once every two weeks during high gaming season (end of year like now, for instance), and once every four weeks during off-season.

Instead of restricting the game choice, however, we're being a bit more open and loose, though we're also going back to reputation requirements. Potential applicants, who must have at least (x) reputation, are free to choose any one game of their choice, with the following restrictions:

Rather than make a Meta post, we will provide a simple form to fill out, where you'll provide a tiny amount of account detail as well as specifying the game. 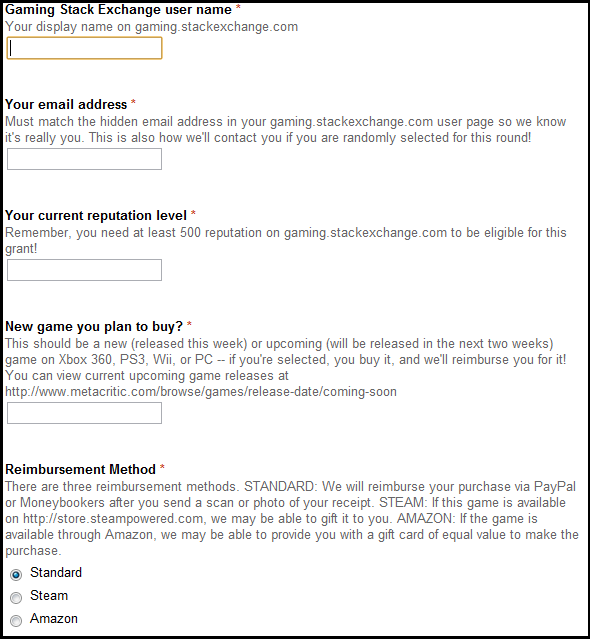 After we collect all of the applicants for a round, 20 users from the applicant pool will be randomly selected. Those selected are free to purchase the game on their own accord and time, and consequently scan and email us the receipts, which we will reimburse. Reimbursements will be handled through paypal.com or moneybookers.com.

So, rather than us buying and sending, it's more of a "you're buying and we'll pay for it". Note, however, that we reserve the option to disqualify users for a specific round if they had just recently won in, say, the past two rounds. We also reserve the option to disqualify a user from the grant process if they demonstrate a lack of content and don't post questions and answers. We haven't seriously run into this issue yet, people are pretty fun here and enjoy the process, but it's better to know about this anyway, neh?

If I had to pitch the process in a single paragraph, then...

Users with at least 500 reputation apply by filling out a form that specifies one game of their choice of new or upcoming games for the current big platforms. 20 users will be randomly selected from this pool, and will be reimbursed for their own purchase of the games after scanning and emailing the receipts (or through Steam or Amazon).

Right now we are planning for 20 games per grant during "gaming season", possibly somewhat less during the rest of the year.

If we perform the rounds relatively frequently as indicated now, I don't see why users should receive more than 1 game each per round. I think it would make more sense to have each user choose only one game and increase the number of users receiving games accordingly.

How does this scheme help create a pool of users who all have a certain game? I thought that was one of the important features of the Gaming grant.

Don't mistake me - a pool of 10 users is probably too large, but 1 person is also likely to not be enough. I'd rather have you pick two games and then two users randomly from each, rather than the other way round.

If you'd rather not do this on Meta and organize through forms, that's cool with me. I'm afraid though that this might result in some kind of scattergun approach.

How does selecting random users guarantee we'll actually get decent participation from them related to the game?

The old grant favored those with high reputations because they had previously demonstrated devotion and/or highly consistent participation. I understand why you would want to change the distribution system of the grant, but wouldn't it make more sense to select users based on, say, participation (i.e., rep earned) in the previous quarter?

You'd still prevent someone like me from automatically dominating the requests due to previously accrued reputation, but going by the last quarter also gives newer members a decent chance at actually seeing results.

I like the fact that this allows for games to be included that may not be the most popular game of the period, but might still generate a lot of good content (see Binding of Isaac for a good recent example). I think it actually makes more sense to target games based on how many questions we think they will generate, rather than how popular they are.

I'm not a fan of the reimbursement aspect, having tried both getting a grant through Steam gift, and getting a reimbursed grant, the former was FAR less painful. So I'd like to see us continue to purchase games directly for people wherever possible.

I'm also concerned that having a single person given a game might not be sufficient. The significantly reduces the chance that the "right" questions will get asked quickly, and it also reduces the chance that we'll have a good answer for the question. For example, I think the full version of Desktop Dungeons has plenty of opportunities for generating good content, but right now I'm not getting answers to my questions about it because our other regulars don't have the game yet.

Finally, I'd like to voice my support for having a less random, more "hand-selected" pool of grantees. This allows us to reward people that have done well with grants in the past, and remove people that have not done well. Clearly this is more work, but I don't think the volume is going to be so great that this couldn't be handled by some combination of Brett, Grace, and our moderators.

There is another aspect I'm somewhat confused about, does the game release date or the user application date determine in which grant period the application belongs?

So, if I now apply for a game that will be released in a few weeks in the next grant period, will I get into the current period or will my application be kept for the next period?

How far in advance can we apply for games?

How do we deal with applications for games that are just about to be released in the next days, but before the end of the grant period? If you randomly select users from all applicants you can't really give out games until you have all the applicants for the period.

What about games that aren't technically released yet (so technically they're upcoming), but are already available to the general public? Think the non-free version of Desktop Dungeon or even Minecraft.

While I'm at it there is another potentially confusing point in the form. The form asks if the game is available at Steam. But the real question is also if the user wants the Steam version of the game, he might prefer to have a boxed version and get reimbursed.

I don't know if you intend to ask that question then in a follow-up mail, but it might be easier to just ask at this point if you want the Steam version or if you want to get reimbursed and buy it yourself.

If the game is available in Steam, I think it'd be better if you gifted it instead of reimbursing the money; easier for everybody and reimbursements are the only option now? What about those who are completely broke or otherwise don't have to resources to purchase the games themselves?

Can the same person receive more than one game throughout the entire giveaway? (different grants/round or the next few rounds)

Honestly, I'm fine with however you want to run the contests. Any chance I have to get a free game, I'm pretty cool with.

Not the answer you're looking for? Browse other questions tagged discussion promotional-grant .