What is the dividing line between gamer problems that we do and do not cater to?

I've got a monster draft of an answer to this question about the Steam security question. It's seriously huge. But there's one thing about it that's missing, and it's ultimately part of the goal that Strix is seeking.

As has been stated here and there on Meta, it is key to distinguish that this website is about gaming. In our last venture into revising our FAQ, I made sure that all of our stated elements are about Gaming. I have also stated that, contrary as it might sound, this site is not about catering to gaming experts.

In less confusing words - we handle specifically questions about gaming, not about problems that gaming experts may run into that are not about gaming. The video encoding question is useful to gaming experts, especially those in this community, because its answers could be used to help provide stronger answers for the site. But that isn't gaming, and that simple notion is what led to the strong opposition to that question. And, ultimately, the security question itself.

Let's cut to the chase. There is a gray area we have when it comes to problems that people will run into because they are gamers. And we currently have a lot of people viewing this from conflicting perspectives, which makes it difficult to moderate. We need to try and work on dispelling this gray area, because it's only going to cause more conflict as time passes. Much more than I want to see this site avoid getting plagued by horrible off-topic questions, I don't want to see us engaging in continued in-fighting because of gray areas. And the further we try to go while putting off the analysis of something this big, the more we just try to strenously weakly justify the connection of questions to gaming, the more often and harder we'll get hit by future questions that challenge our notions.

There are two elements we have to consider when it comes to gamer problems - when the question isn't actually about gaming itself, and when it is about gaming but it isn't restricted to it. Both of these suffer from the ability to be abstracted into a question that is quite outside of our scope.

Rather than pile on the other two examples, let's take a new example relating to protection of devices.

How can I protect my games from getting damaged by lightning storms?

We can see this from a variety of perspectives. It's definitely something that gamers care about; I still miss my SNES, which was ruined by a storm less than a week after I finally bought Lufia 2. It's definitely something that gamers will want to know about. It's something we will most likely know the answer to. And it is definitely about the gaming elements, it's pretty much about consoles (and probably gaming PCs, if you have those). From a sympathetic standpoint, you really don't want to just reject it.

This however isn't a gaming-specific problem. It's a problem about things that get plugged into the wall, which affects everything from brave little toasters to rocket lawnchairs. Is that enough of a deterrent? Well, consider the following course of events.

How can I protect my games from getting damaged by earthquakes?

Common sense tells every one of us that this is really not about gaming, and should be outside our scope. We really can't find it reasonable to classify this, can we?

But earthquakes can knock out powerlines, just like blizzards can. Blizzards can cause water damage, just like floods can. And floods have special pertinence with regards to electronics, just like lightning storms do. It's a very specific example, but the point is, why would one disaster prevention question be allowed, but not the others?

With this example, let us then expand to the overarching point of this thread. What is the goal point that we should look for when we run into borderline questions and want to revise them to be reopened? What are the qualities or attributes that make a gamer problem acceptable versus unacceptable? What is the dividing line?

Surely, we have to draw the line somewhere. We can't just allow all questions that have "while gaming" in it ("How to draw the turtle in LOGO while gaming?"), but those are problems all passionate gamers care about. It'd be a shame to reject those questions and then see Gamers.SE pop up to fill in the hole.

Actually, this is the kind of questions experts will be more interested in, and the questions that can differentiate us positively from walkthrough/FAQ sites.

So when is it we should draw the line? Shaun says, if the question can still make sense when you take the gaming out of it, it's off topic. I say this is too restrictive, because the gaming perspective can change the answers you'll get.

Take this example — "how to record videogames under Linux?" If we remove the gaming part we get "How to record the screen under Linux?", which would have nothing to do about videogames (duh, that's the whole point of removing the videogame bit). Yet, tools such as recordmydesktop need additional flags when 3D acceleration is involved, flags that a general answer will hardly mention.

So here's where I would draw the line. Take the gaming part out. Would your answer be the same in all parts? If no, answer and focus on those parts where the gaming perspective makes a difference. 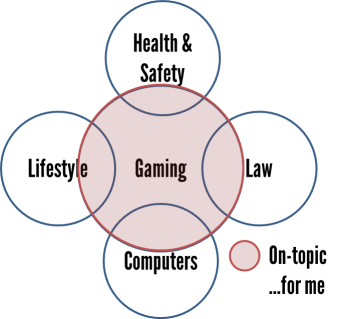 On Super User most of the time we err on the side of closing it first, thinking whether we should make an exception later.

Ironically I found the controversial screencasting question highly useful, because it would help me answer better on this particular site. Not anywhere else, this site. That counts in my book, though it would have been fine had it been on Meta.

That said, while users claim pure ingame-Q&A is a ridiculous narrow subset, I would beg to differ. Gamers have a ton of questions while trying to figure out how games work without reading a manual or looking for solutions elsewhere first. The fact that there are tons of strategy guides, Game Q&A sites, How-To Youtube video's, the list goes on...

My point is: there's nothing wrong with being laser focused on being just about answering game-related questions. We just need to work harder to get more on-topic questions on the site.

Opening up to more 'related' topics, as badp suggests would be Grace's moderating grey area nightmare. Because as his nice little Venn diagram shows, there's a border somewhere and every single user on this site is going to interpret it differently.

If it were up to me, we don't have to start deleting/closing these questions outright, but we should be clear that we don't encourage asking them either.

How can I protect my games from lightning strikes?

How can I protect my stuff from lightning strikes?

We can all agree that this is off-topic. Clearly off-topic.

How do I beat the 15th test chamber in Portal?

Well, we can't remove the game there. That one's on-topic.

How do I record my SC II match to show later on YouTube?

How do I record what I am doing on my computer to show later on YouTube?

Yep. Off-topic (in my opinion).

How can I protect my World of Warcraft account from hackers?

How can I protect my online accounts from hackers?

Some may argue that there is an answer specific to the game: the Blizzard Authenticator. However, we're still outside scope in my mind. Protecting your WoW account with the Blizzard Authenticator is not a question about gaming. It's a question about two-factor authentication and general account security that involves a game. If you have general questions about how that works, you want a security forum. If you have specific questions about how to get yours working, you want Blizzard's customer support team.

Of course, you should apply this rule to our other rulesets. You can't remove the game concept from a game recommendation or questions about games involving shady activities, but they are also still off-topic.

This line of thinking has worked for me. I find it easy to apply and it works in pretty much all cases. I think I've only run into once instance where another moderator and I had a conflict of opinion on a question as a result of this rule set and it involved live-streaming of games (which, in my mind, is a question about live-streaming active computer content and simply involves games as an example).

This is essentially a reasoning behind Shaun's rule idea, but it's too big for a comment.

To reiterate Shaun's solution: These questions are off-topic in all cases, with no exceptions. The rule would be: If the gaming elements can be completely removed from the question, then the question is off-topic.

These questions are the next game-rec. They need to be killed with fire before they can spread and be the next plague on this community.

The most successful and professional gaming communities are the ones with the strictest moderation. They are the ones that choose their image, define their image, and stick to their image. Things that are off topic are deleted mercilessly. Users who break the rules are removed without question

And that system works. Look at Team Liquid. Look at Shoryuken. Look at Smogon. These all work. They all have extremely strict requirements for making threads and dealing with off-topic posts. These are professional communities that work well together to dissect their games, to learn everything about them, and to have success.

Look at GameFAQs, by contrast. It's a mishmosh of rampant stupidity, misinformation, flaming, trolling, and nonsense. Sure, there is quality content there, but it is a diamond in the rough. It is hidden behind the wall of garbage.

We need to define our purpose specifically, and narrowly, in order to thrive. If we allow all sorts of tangential nonsense questions, we're doomed to mediocrity.

Not the answer you're looking for? Browse other questions tagged discussion faq allowed-questions .

2
Game directed software questions
25
Design Ideas for Gaming Site (updated with screenshots v2)
6
Leniency and migration - The Hardware Policy revisited
0
Is this question about general internet security on topic?
18
"Why did They design it that way, anyway?", and why do we allow or disallow these?
17
Professional Gaming
17
Why was this question closed for having illegal content?
26
What is the difference between historical trivia questions and identification or recommendation questions? And should they be allowed?
11
Where is the line between "glitch" and "cheat"?