How to properly use the new review queues?

The new first answer and first question queues let you do these actions: 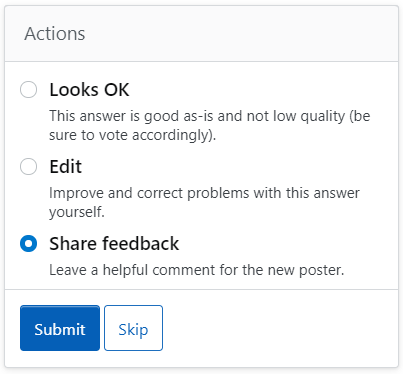 I've encountered a couple of posts that were a spam question and a question posted as an answer. The actions suggested were not useful to me:

If I leave a custom comment and/or flag the post nothing is registered as an actual action made by the reviwer. So, how should I manage these situations?

At present, the current way to use these queues is to either leave feedback using the canned comments, (which get written on the post by the Community user), mark the post as "Looks Ok", or edit the post in question. You can also perform an "Other Action" (see below) to also finish the review item. You can flag the post if it needs it, but currently this will not allow you to complete the review task, leaving you in a weird position of having to still either leave feedback using the canned comments, or mark it as ok/edit it - all of which seem awkward to do after flagging the post.

There are a lot of improvements planned for these new queues, as discussed on the SE Meta site. There is a helpful answer of all the implemented/planned/rejected bug fixes and feature requests for the new queues on the post. I encourage you to check it out, as it is quite a lot to repeat here.

The biggest issue (in my opinion) that is currently being planned can be seen here - this deals with the flagging awkwardness I mentioned earlier. 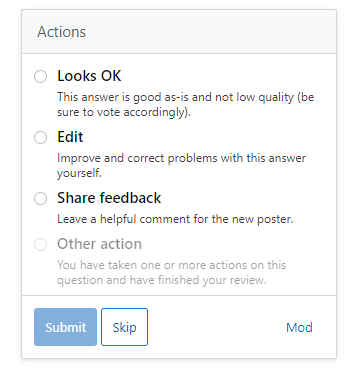 The main change being the "Other Action" option, which will automatically be selected if you:

Not the answer you're looking for? Browse other questions tagged discussion support reviewing .

63
A personal appeal to Jeff Atwood: Recent Changes to Gaming
10
Declined custom mod flag on a first post/late answer review item
4
How are answers with the same score ordered?
3
Flags on a post made by deleted user automatically set not-helpful?
6
Should I mark edits that have some good aspects and some bad aspects as helpful or not?
9
List of Bedrock NBT workarounds to be posted as separate questions
10
Feedback regarding review suspension