So I just encountered this question and it seems like something's off: 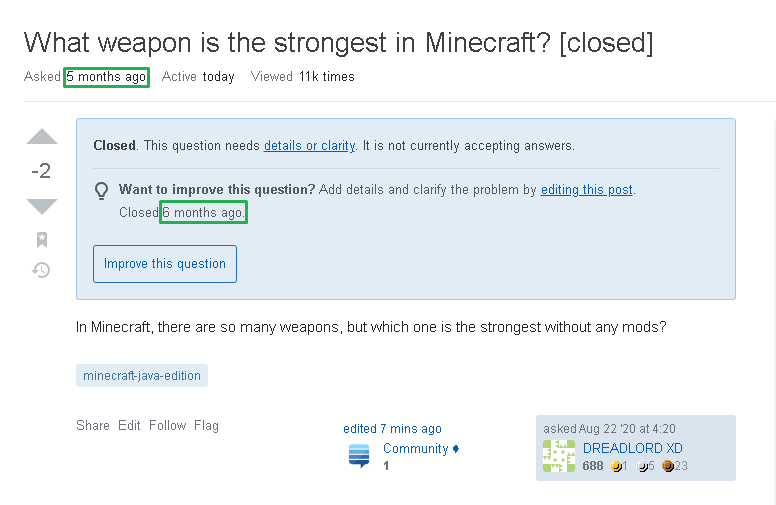 As it turns out, the asking time seems to be quite later than the closing time and it's strange considering that this isn't logical.

The question being asked on August 22 last year, and for the next 4-5 days, it got closed, so it's weird how the asking time is later than the closing time.

Is there some problem with the relative time calculation going wrong?

This is due to incorrect rounding. It has been partially fixed, but only for years: Post was closed before it even existed is status-completed.

I think your particular case might be the same as this meta SE bug report: Inconsistent rounding of "months ago" which is currently status-deferred - according to JNat♦ (Community Manager at SE) there are no current plans to address it.

Not the answer you're looking for? Browse other questions tagged bug status-deferred closing asking-questions .

7
If a moderator closes and then reopens a question and then deletes all the comments, how do I even know what's up?
144
A Close Vote is not a Super-Downvote. Please don't use it as one
11
Asking if a game-related-product is available, at all, anywhere, for anyone
2
Broken Link in Closing > Off-Topic
21
Duplicate Questions: A New Look
15
Re-evaluating the text of our Game Identification close reason
19
Why we should make a flag reason for closing modded Minecraft tech support questions
2
(not) Closing old questions
5
Are there best practices for asking a question about a very old game?