Should I mark edits that have some good aspects and some bad aspects as helpful or not?

The Suggested Edits Review Queue contains five buttons for actions to take on suggested edits, two of which allow the reviewing user to edit the post further.

The only difference between the "Improve Edit" and the "Reject and Edit" button is the text presented for the user to edit, and the presence/absence of the 2 reputation gained to the proposer. Usually we press "Improve" if the suggested edit was helpful, and "Reject and Edit" if it was not.

Some edits, like this one, have some good and some bad aspects of them. While editing the content of the post to be good, they also introduced minor spelling/grammar errors into the post. Either way, I was going to have to edit the post to fix it, but I did not know whether I should mark the edit as good or bad, and I clicked Reject and Edit without thinking. Now, thinking back, I probably would have marked it as a good edit were I in the same situation again.

Please provide your thoughts on whether you'd press "Improve" or "Reject + Edit" in the following situations (considering just whether we should mark the suggested edit as good or bad, not considering the amount of text you will have to edit). Some of these are quite similar, it's okay to say that you would evaluate it the same as one or more of the others:

TLDR: Don't focus on the giving of rep, focus on signalling to the editor whether their action was useful/helpful or not.

You are focusing on the wrong thing. Don't focus on the giving of rep (you only give rep when you award a bounty), focus on the edit.

The first thing to do is to decide is this edit good or not. To see if it is a good edit, lets looks at reasons why we should reject an edit: 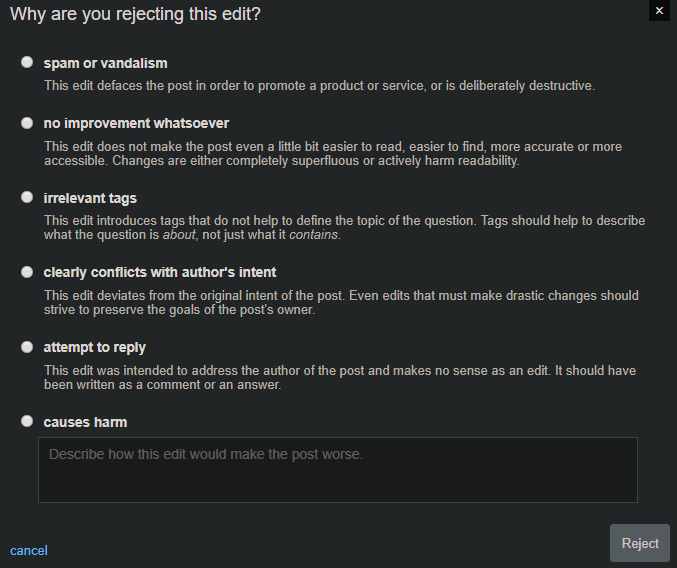 After you decide whether to approve or reject the edit, you then look to see if you can either improve the edit or improve the unedited version. If you can you adjust to Improve Edit, or Reject and Edit based on your prior selection.

The whole point of reviewing is to help the person who preformed the action know if what they did was acceptable or not. If they fixed a bunch of spelling, but maybe missed some formatting issues that's still a helpful edit, just one that could be improved. If they fix 2 misspellings, but leave 10 more obvious ones, I would reject it to signal to the editor that they should look to fix all spelling issues that are there. If they instead fixed almost all spelling issues, but missed 1 I would approve and improve the edit, as they showed a clear attempt at fixing all issues in the post.

6
Why was my edit rejected?
4
The new review system allows me to access the Suggested Edit queue without the required amount of reputation
21
Should I approve suggested edits that I don't know if they are true?
2
Can we no longer improve suggested edits?
16
Is there a definition of 'too minor' edits?
14
Should I reject additions to answers made by other users?
20
Rejecting an edit because "I don't see this answer sticking around"?
6
Do you need the [minecraft] tag for [minecraft-commands] or [minecraft-redstone] tag questions?