Welcome to the first in a (hopefully) ongoing series of...watching me play games? I'm going to be playing a very old series titled UFO.

First, a little bit about the series. It's made up of three games: Aftermath, Aftershock, and Afterlight. They all sort of follow a loose timeline, and play similarly. They're sorta like an upgraded old school X-COM, but before the relatively newer XCOM series. Battles are, "real time", but allow pausing at any moment. All actions take a certain amount of time, so you can pause, plan out your actions, un-pause, and watch the inevitable carnage unfold. In 2003, the graphics were pretty decent, although they don't really hold up well today.

This will be recorded instead of streamed live; I'll get better quality, and due to time constraints, I can't guarantee a regular schedule anyways. That will allow everyone to watch at their convenience, and follow along as they are able. I'm tentatively going to say I'll do an hour a week at the start, and see how I can handle it.

Okay, but everybody plays games

Now, to get to the draw: I'm going to try to make this a semi-interactive series; it is a single player game, but I'll be naming my hapless minions brave soldiers after participants. These participants will have their say in how their characters develop, what their focus is, what weapons they want to use, and so on. Want to be big and tough, but also a coward, so you just chuck grenades at everything? Hopefully you have good aim! Maybe a speedy guy that hates armor and goes around keeping everyone nice and healthy? The sky (or game mechanics) is the limit!

To participate: post an answer here. Your username will be the character's callsign. Tell us a little bit about your character, and how they've survived in this alien infested planet.

You can use the following picture to get an idea of the sort of equipment you start with, and how the stats and skills work in the game. Tell us how they'll see themselves growing, what areas to focus on. 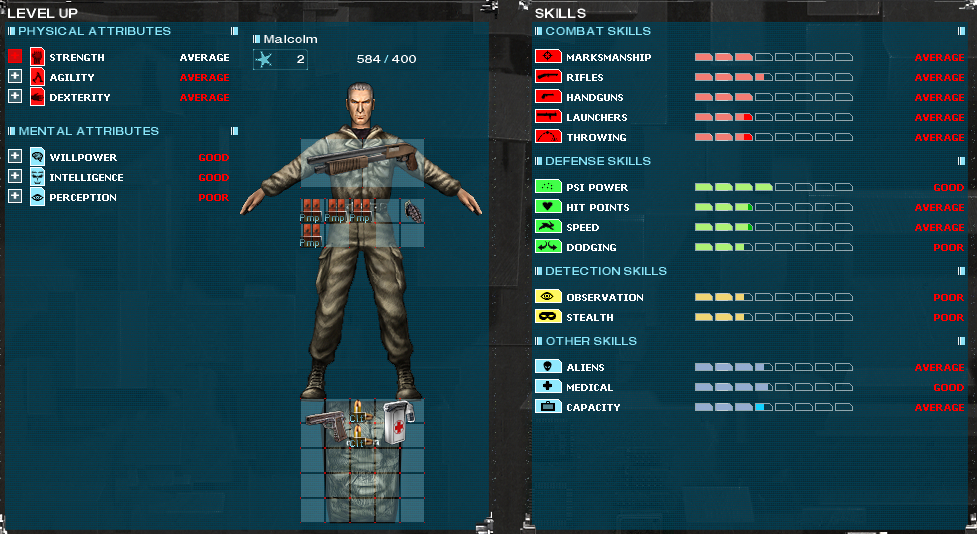 This will be played Ironman style; no reloading because someone just dropped a grenade at their feet. Just gotta pick up the (literal?) pieces and soldier on. This does present an opportunity for subsequent participants, though, as now there might be a spot for someone else...

How does my guy get added?

Characters in-game are added on a somewhat random basis, so as they become available, participants will be added to the roster on a first come, first serve basis. You'll have to watch to see how they, "help" the rest of the team.

Sounds great! Let's save the world?

For sure! Hope that shotgun can stop laser beams...

The playlist is available here
For specific episodes:

Discretion is sometimes the better part of valor. It is my philosophy that in battle, you should never play fair. Stay hidden, learn your surroundings, strike from cover, and strike hard. This philosophy kept me alive when the aliens came to my dad's old hunting cabin up in the mountains.

Generic marksman/sniper who likes long range rifles. Decent at stealth/agility/endurance. Likes to play it safe whenever possible. Play in a safe, overwatch position, and take potshots at aliens who foolishly run into the open.

Sign me up. Considering my reputation for being such a fantastic commander who never uses soldiers as human shields, I think it's only fair that I'm on meatshield scouting duty.

I guess I'll join in. I usually play tank roles in games with a focus on lots of strength and health. If I can somehow tie speed into the mix, I tend to do that as well. Rifles are usually my go to guns as well since they are often fairly versatile.

Episode 1: I survived!
Episode 2: I died to a Slime Thrower.

Me and my hug gun are ready to serve. (Big guns, wielded inexpertly but with lots of heart.)

Even though I don't have much reputation I will play, so I want to sign up.

My character is more of a melee fighter, I welled the Terra Blade and will block attacks with the Akana Sheild. I have a decent amount of health. But I some how have decent speed but lack the stealth. But I hit like a truck. I survived the aliens but taking them out slowly by picking out the weak ones. I also have found out that they have weak spots on the body allowing me to pick them off one by one.

Always ready to jump into the fray with my trustee sidearm, I'm a run and gunner. Marksmanship and handguns are my specialty, with absolutely no other skills in defense except for a spaceship.

What? There are no spaceships?! FINE, give me another handgun.

I daresay my knowledge of aliens has to be higher than the average fox, so I hope we meet some along the way!

Episode 1 Update: I'm still flying my ship in space and haven't joined the fray yet.

Episode 2 Update: I've been recruited into the force! Suited up with a sub-machine gun and ammo, I'm ready to go!

I'll join if you need an extra to pad out some space :)

Given my handle I think I fit a "Scientist" stereotype, preferably of the "Mad" variety.

I have studied the Xenomorphs extensively. I know their tech, their strategies, and most importantly, their weaknesses and how to exploit them.

Stats-wise: Aliens, Psi Power, Intelligence etc. I suppose I could act as a medic to my fellow compatriots in a pinch but I make it clear every time that I'm "NOT THAT KIND OF DOCTOR!"

I guess I'm reluctantly in. My parole officer claims that if I survive, I will be allowed to return home. Can I just say I never intended to start that wildfire? You know how it goes, you step outside of the tent for a smoke break, you don't put out the cigarette properly and before you know it, 30 acres of Savannah ground go up in smoke. In theory the state could still appeal, but after the preemptive nuclear strike on Atlanta, they have bigger problems to worry about.

Anyway, if there are any flamethrowers or other fire-based weapons, those would be fine for me. For once I'd actually like to be encouraged to set fire, instead of being called mentally ill. I can't help it that things just spontaneously combust around me.

My childhood idol was Teddy Roosevelt and I live by his words "speak softly and carry a big stick"1. As such, I feel like it only be appropriate to specialize in Stealth and giant shoulder-mounted explosive devices.

I volunteer as a meat shield (one that stays in the shadows or away from the front line :P)

I prefer stealthy assassin type combat or long range sniper. Staying away from trouble keeps me alive and being alive improves my usefulness! 😊

As Timmy Jin, I'm mostly playing tanky characters, both in video games and in TTRPG.

My buddy would focus on health and have enough dexterity to carry his launcher/shotgun but not much more (Agility? Why need to jump over an obstacle when you can charge through?).
He would have an average intelligence and perception but will have enough willpower to rampage into aliens crowd.
As said earlier, for combat he would switch from the launcher to pierce trough alien armies to close range devastating weapon (shotgun is great, but any other alien weapon will do) to kill still standing lifeform.
This guy would have a good psi power to pair with his good willpower and a lot of health to fight all day long. To talk about his speed and dodging abilities, he's more the kind of guy you throw in battle using a jetpack and then which move only to get closer to his next victim.
Stealth is something he's not used to, and even if he would he's stature would limit his possibilities. As he's not used to it, his capacity to detect stealth units are on pair with his perception, average. Finally, he knows enough about medicine to stop bleeding and enough about aliens to know that there head blows when you shoot at them, but his carrying capacity is as good as his strength and health might let you think.

Finally, you've come to rescue me!

As a mycologist, I developed a disturbing fascination for all things alien since their application of spores as a weapon of mass destruction. I never held a single firearm in my life, though, and don't plan on starting now.

I have a keen mind and eye, an uncanny skill to dodge incoming projectiles, and can easily patch up a fallen comrade - if I can take my eyes off of those greys.

I'm GnomeSlice and I like to use gadgets and build way too many structures and traps in games.

If there's such a thing in this one, sign me up. If not, I generally play an all-around commando style with speed, armor, and damage. I also tend to like area of effect abilities like grenades.

Not the answer you're looking for? Browse other questions tagged discussion community-event fun .

7
How can we sculpt character/strategy build questions?
10
Reconsidering how we tag games in a series
9
Arqade's 2012 Doomsday Edition Secret Santa (DESS)
10
Gauging community's interest in a Secret Santa 2013
0
How to ask moderator for help, raise awereness, or policy changing
15
Screenshot of the week contest #3
7
Format of "Where am I this Week?"