What should be done about [Strategy] and similar tags? What conventions should we be adhering to?

Those who have been in chat for the past day or so have seen me ranting at length about how tags which are not [Game Title] are, for the most part, fundamentally not useful.

As an example, take a look at [Strategy], which has 121 questions about 47 distinct games. Even worse, [Strategy] could be a useful tag as a filter for the strategy genre, but the tag is presently poisoned by it's broader use. of those 47 games listed, less than half are actually Strategy games. The tag is also being used be people asking for help with platformers, puzzle games, squad-based shooters, RPGs, Roguelikes, and even Rock Band.

Essentially, there is no positive value in using this tag as a filter - it's only ever going to be useful in conjunction with another tag, at which point, isn't that what the Search feature, which can read the entire body of a question is for?

Now admittedly, [Strategy] is a special case, and could probably use somebody going through and just cleaning out all the garbage so that it can continue to be useful as a genre tag. To use an example that is less akin to the [Programming] tag on SO, lets look at Weapons 17 questions about 16 games, and for which there is no broadly applicable knowledge which binds them together. In other words, there is no such thing as an expert on [Weapons], and I just can't see any use case for which the tag is useful except when used to drill down further within questions about a particular game.

The community seems to have rejected the notion that tagging every game is poisonous - I'd go further and argue that using anything other than tagging by game for 90% of cases is poisonous, and that what we need are conventions for when, where, and how to use tags that go beyond [Game-Title], [Genre], and [Platform].

I'm going to focus on the general scenario of "semi-dependent" tags here, rather than strategy specifically since that one is ambiguous and not very well understood (like pointed out over here, as well as in comments above).

If we only have 17 questions tagged weapons across 16 games, this might mean the tag is bad. Alternatively, it can mean any of two things: we only have 17 questions actually about weapons, or we need to be a lot more prudent on tagging them. This is one of the dependent types of tags that I think will actually be pretty useful for our site, since there really can be a lot of questions about weapons in-game.

Can text search replace this kind of cooperative tagging? Sure, but let me highlight something from a very early discussion on a similar tagging qualm.

It's a straw-man argument to say that you can search without tags. Of course you can. So why have tags at all? You can search for "Civilization 4" quite successfully, whether or not there's a Civilization-4 tag. Large tags allow people to follow things they're interested in. Small tags allow specific, highly targeted searches.

It may not necessarily be any better than text search, but tags still have their operations in categorization of content and the filtering of content on those categories. Tag search and text search shouldn't be in competition because ideally they should work together.

That said, good tagging helps for the situations when people phrase things differently. The plague of duplicate questions that differ simply by choice of words is testament to this foul shortcoming of text search: you simply cannot find what isn't there. This same shortcoming applies to tags, but the thing here is that tags can represent the specific as well as the general. So you can ask a question about weapons without ever saying "weapons". In a multi-question theoretical example, suppose we got questions about the game Sora, one question about the Pilebunker, one about the Flamethrower, and one about the Bullet. They really don't need to share any words besides the name of the game and maybe "damage" in their question bodies, but the presence of a unifying tag lets me group these together in a way that they should since they're all about the same content: weapons. You can accomplish this categorization without needing to alter the word choice of the individual questions, because tags are independent of the author's expression of the problem.

To me, a tag like weapons functions similar to a tag like [strings] on Stack Overflow. Since you aren't the most programming literate (according to those transcripts), I'll basically explain that strings vary wildly between implementations in different languages, but the core concept of what a string represents (a sequence of characters typically forming a word or sentence) is fairly consistent across languages. There's not really a "broadly applicable knowledge" on strings, instead we just plop the tag on questions for languages when strings are an important concept in the question, like how to manipulate strings in a specific fashion. Tag badges are even won for these kinds of tags, not because of a "general expertise" in strings across all languages, but simply for being good at some language's strings.

This kind of cooperative tagging is promoted in large by our friend the Related Tags column. Below are for [c#] and starcraft-2 respectively on their respective sites. 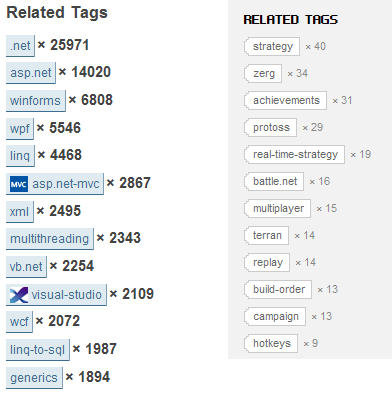 So that image doesn't actually have strings, but [multithreading] and [generics] are two other examples that operate on the same principle, they may have general understood data but language context is where they shine. On our own site, I can see that if I have a question about how to get a specific achievement, there are already 31 questions tagged achievements which might answer my concern. Maybe I'm having trouble with replays, in which case I can spot 14 questions tagged replays.

What hurts tagging isn't tags that merely rely on other tags for context. It's tags that are utterly meaningless, or perhaps just not that good, when they are alone. Searching for [achievements] alone isn't going to turn up that much good if 90% don't deal with the games I care about. But the tag still has meaning alone, because the concept is relatively understood across our scope of Gaming to have a specific meaning. So without the rest of the context, I can still get a good picture of what the question should be about, and context will only narrow it down to something better.

For a tag like [weapons], this should be similar to how it works with [strings]. While the implementation, behavior, and style of weapons will vary between games, the concept of what a weapon generally is will remain... relatively consistent as something I hit things with. I probably won't need to group them across games, but grouping them within the game, outside the constraints of the question body, I see that as a very positive use as a filter.

I have already posted in the past about the misuse of this tag, I'd just consider banning it and forcing pople to use real-time-strategy and turn-based-strategy as there really is no use for an [advice] tag tbh.

That said I believe non-game tags can be useful. boss-fights, mini-game, minmaxing, farming are all tags that should have a right to exist, just like you have tags about, say, threads on SO.

At any rate it is little use to go OCD on tagging. We should instead focus on leading by example by asking great questions with non-brain-damaged tagging :)

Does it have to stand on its own?

So I'm not sure why standing on its own a necessary prerequisite. I know I initially had the same reaction as you, but then I realized, that what additional functionality would I want from subtags other than filtering already filtered results?

If I want Strategy in Civilization 5, I would search for [civilization-5][strategy].

Wow that seems to have really worked. Sure maybe I'll never just filter strategy, but the same would be true for a subtag. In fact, I've found that subtag functionality already exists by just looking for the intersection of a game and a useless tag.

Not the answer you're looking for? Browse other questions tagged discussion tags site-policies .

8
Game-specific tags
10
Why does Gaming.SE use tags differently from other SE sites?
4
What's going on with meta tags?
6
Avoid tags that mean different things in different games
5
[guide], [strategy], [tips], [how-to]... which do I use?
4
What should be our battle plan for tagging strategy and tactics?
3
What do we think about maintaining a site list of covered/tagged games?
1
Statistical data on tag usage
0
Starcraft 2 'strategy' tag should actually many times be 'tactics', agree?
3
Tagging Suggestions
See more linked questions

4
What should be our battle plan for tagging strategy and tactics?
5
When should we use genre tags?
0
Starcraft 2 'strategy' tag should actually many times be 'tactics', agree?
3
What do we think about maintaining a site list of covered/tagged games?
0
What is the strategy-guide tag for?
4
How should I tag on gaming SE? (Are genre tags used?)
2
Roguelikes tag wiki is weird