If you can't see it right now, that's by design! We're hoping to get feedback from you before rolling it out to everyone permanently. If you'd like to review it, here's how:

How do I enable it?

Click here and check the "Beta test new themes" option. This will turn on the new theme for all sites that have one in testing, including this one. Here's more info on how to opt in. You can uncheck the box to revert to the older theme until the site is live for everyone (note, it will take a few minutes to go into effect).

What type of feedback do we need?

On this post: Bugs related to this site's design elements

Please help us look for issues/bugs related to the theme design and how we have mapped the old theme to the new. This needs to be done within the limits of the new unified theme.

If you have concerns or issues regarding the left nav or the overall approach we are taking to theming, then this Meta Stack Exchange post is the right place for feedback.

As you may notice, there are some unique design elements like voting arrows and tags that are being standardized in this process. Keeping these custom elements makes our ability to maintain the sites too complex and, while we're very sad to see them go, we're in a difficult position of needing to make the site designs work together so that we can continue to address feature requests and bugs that will make your Q&A experience better. This is addressed in a Meta Stack Exchange post if you want more detail.

If you're like, "What the heck are you talking about?", then you should read the Meta Stack Exchange post entitled Rollout of new network site themes (and maybe the posts it links to for the full background).

Thanks so much for your constructive feedback!

UPDATE - The ship only fires once per page load after a five second delay.

Adding hover or click to this does make it more complicated as it makes the base code for this site different than others but it's not out of the realms of possibility to add this. For the time being, thoughts on making the delay for the gif much slower or not repeat indefinitely? It's currently at every 5 seconds, we could either slow it to every 15 or make it only fire once or twice before stopping. ~Catija

The Ask Question mothership lazer animation is distracting because it is no longer triggered by user interaction. It used to fire on hover, now it fires in regular intervals. The animation should only trigger when the user interacts in some way with the ship.

We've changed the font used for the logo to be more legible and still have an Arqade feel. Hopefully y'all like this version. We're going to stick with this for the time being but feel free to start a separate discussion about it (in a new post, maybe?) if you want to talk about it. ~Catija

The site same logo looks weird. I don't think the slanted font works outside of the spaceship.

It is, but only to a degree. Some sites have textures in this space (see Code Review) but it must be pale enough for the black left navigation text to be legible. As such, the light grey from the logo spaceship was used. ~Catija

Is there any specific reason the background at the sides isn't really themeable per-site? I would prefer to have the blue/black stripes there as before. But I haven't seen any new site designs that keep that part of the old designs.

While it looks like there's room for it, remember that the site design is responsive, so on narrower or mobile screens, it would interfere with the site logo/name. ~Catija

There's plenty of space where the tabs used to be, might as well put the mountains that were under the logo there.

I think the spaceship formerly known as the Ask Question mothership does need a few more details in the area where the text used to be. The large uniform area looks a bit out of place there.

Can we get a face for our beloved mothership?

Without the 'Ask Question' text, the face of the mothership looks really plain:

Can mothership v2 have a few more turrets/lazors/features in the blank space?

A couple of things I noticed:

1. What happened to our 'Planet surface'/Arcade Footer?

Now it just looks like we're floating in space...

The left nav is collapsed by design on some pages, the Help Center is one of them. You can access it in the upper left corner hamburger menu.

2. The help center home page has no left-nav

(all the help articles do) 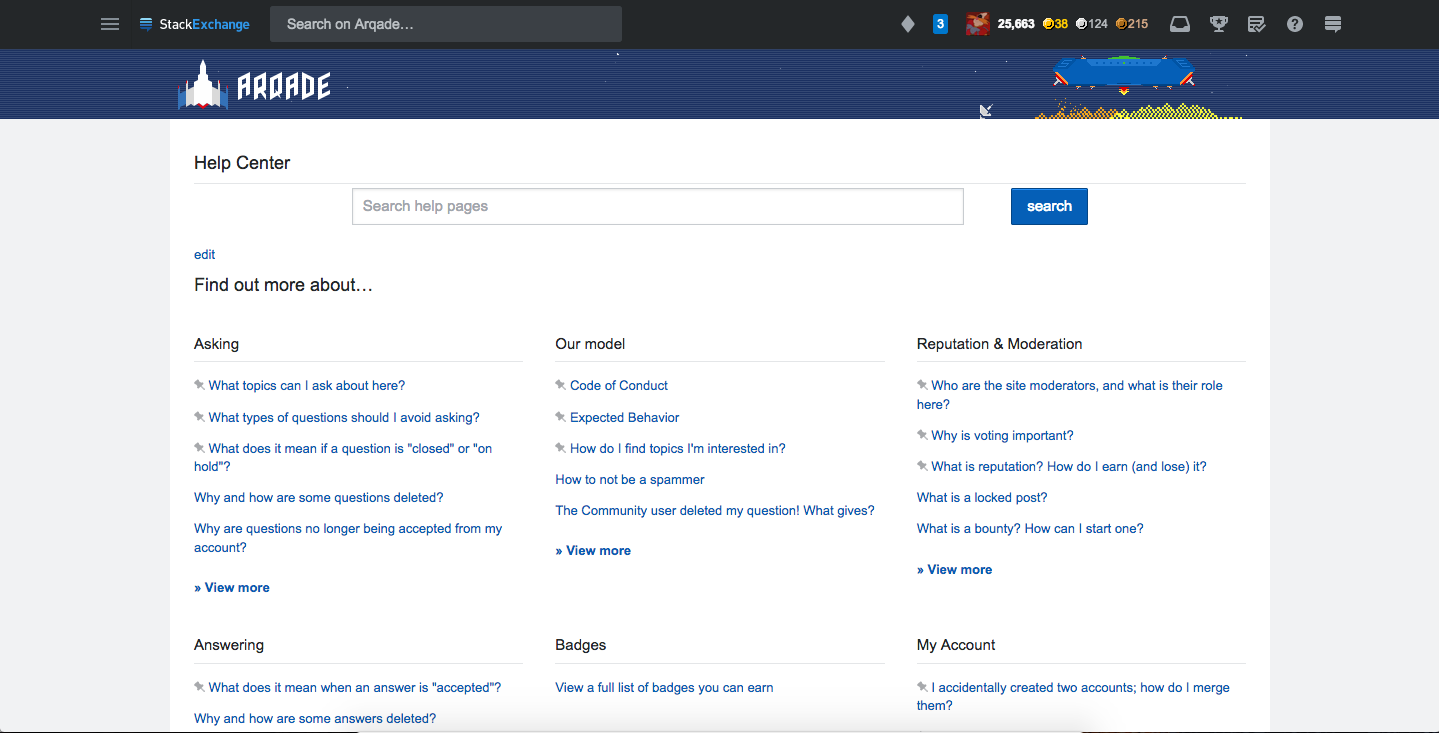 Maybe we should just ditch the mothership entirely

Others have said that the mothership feels out of place by just randomly shooting its laser beam, rather than doing it on hover like it used to. Ultimately though, the mothership just seems to me like an old artifact that doesn't really fit on the current site, and I think that replacing it with something else would be better than fixing it.

For a site about gaming, I'd expect a game controller, or a pixel character, or a ? block, or something else that's evocative of gaming. The mothership doesn't convey to me "gaming". It conveys to me "science fiction" (and we already have Science Fiction & Fantasy Stack Exchange).

I'd be in favor of just replacing the mothership, rather than trying to "fix it". If a replacement now isn't really viable, then I'd be okay with a replacement on a later date.

Doesn't the Rocket portion (logo) look weird? There is no grass under the rocket. The text ARQADE is also not in the rocket body.

(thanks for preserving the lazers)

Is the old mobile site slated to be replaced by the responsive design any time soon? Because there are a couple of things I noticed when switching from old mobile to the full responsive site that are concerning

May just be a symptom of having mod tools, but there is no free space on the bar, no clear separation of areas. Could we maybe drop or combine some functionality here on mobile widths? For example:

Can this wrap to another line instead? 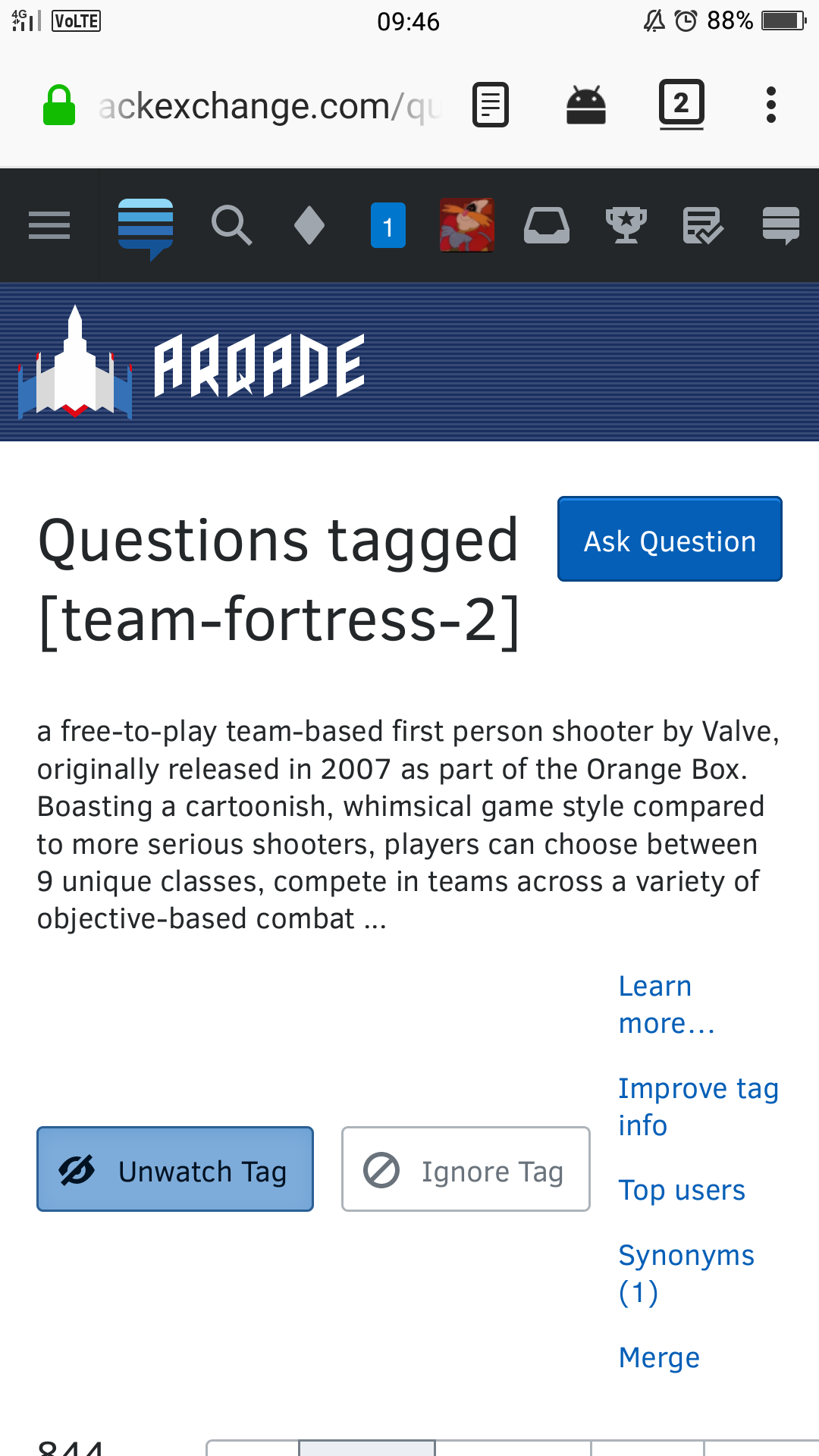 3. The question title text is too big on long questions 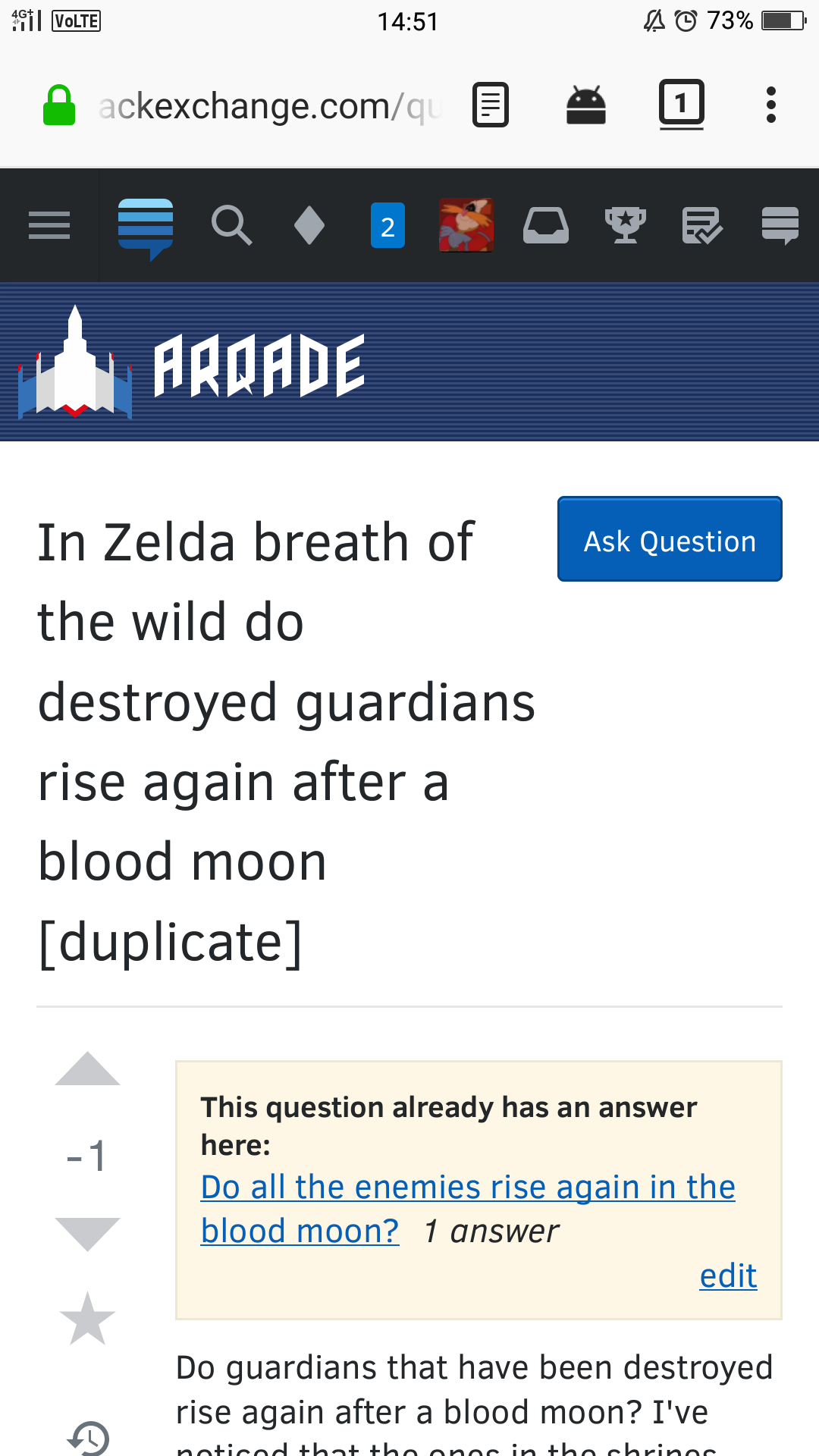 The first thing I noticed is how bright the background is now without the textured background we used to have that now only applies to the header/footer. Arqade was one of the few sites I didn't have to have a custom dark theme for as it was dark enough not to hurt my eyes with continued use. Can we get a darker background for the left and right sides, or even just have the background match the header and footer?

The largest point of feedback for me is that watched tags are no longer highlighted in blue, and ignored tags are not greyed out. This makes it more strenuous for me to determine which questions I can potentially answer.

Also, the mothership should not animate unless you hover over it. It's immediately distracting when it shoots its lasers, and there's no reason it should be ripping my attention away from answering questions.

Once you opt-in to the beta, you can't switch back out to the old theme.

Nevermind, as Catija commented, there's just a few minutes delay before the theme swaps back. 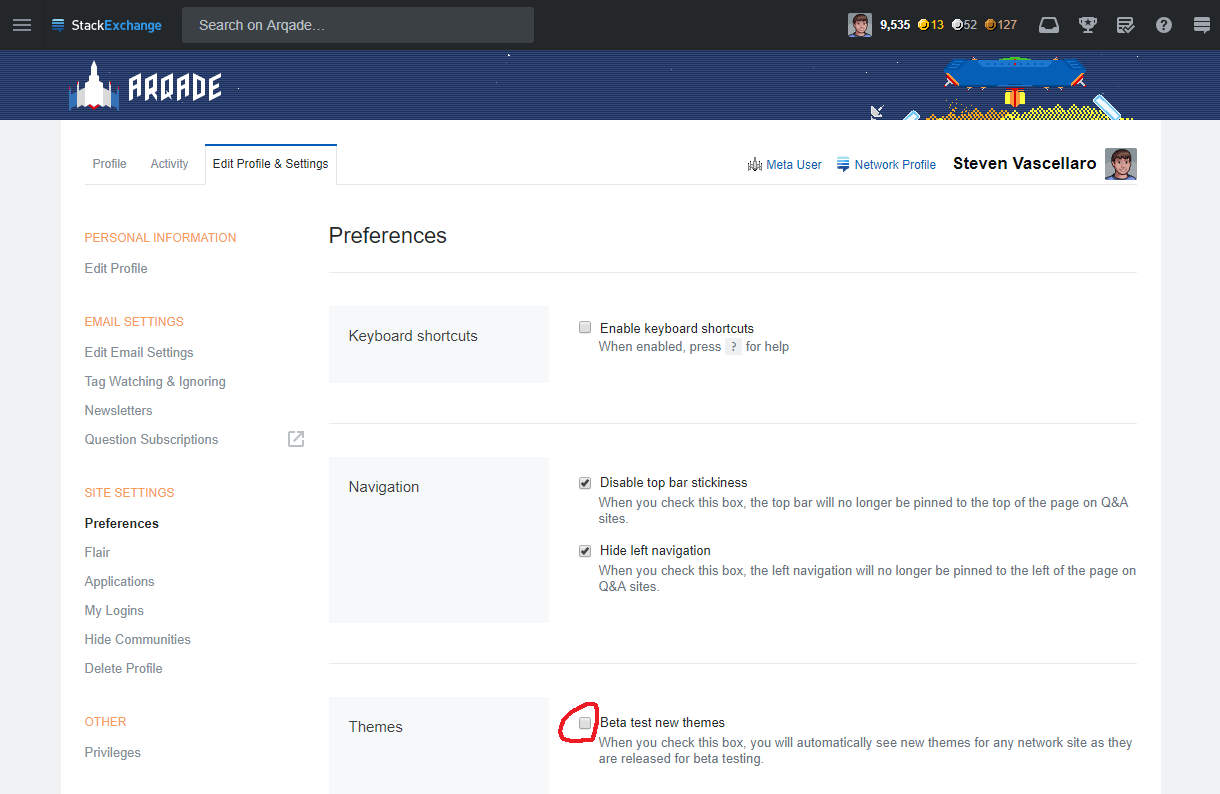 There is a link to badges in the top bar (very top of the achievements dropdown). At this point, there's no plan to add badges to the sidebar. ~Catija

The Badges button seems to have evaporated. I am not sure if this is because people decided it wasn't useful or used often or what, but I miss it, because I used it reasonably often in moderation things and to remind myself of stuff. Can we have it back somewhere? Like there doesn't appear to be anyplace to see a list of all the badges you can get, which feels off to me somehow. No fun earning a thing if you can't like...see how to work for it.

10
Minor design updates
2
Why does Gaming SE have an 8-bit theme?
10
How is the Arqade spaceship supposed to work in the new design?
10
Mod tags look all funny
12
Tags on meta look bad when hovered
11
FAQ/Reputation info images are low quality
8
Is the site re-design for the Mass Effect 3 promotion permanent?
5
Hovering over the community links changes the header height
6
Custom user-styles, make the nav-bar buttons have a hover-state
4
Please fix the box shadow on the badge hover-state!
See more linked questions