A few years back, Arqade decided that simcity-classic would to refer to Simcity (1989), while simcity would refer to Sim City (2013).

However, the tag name simcity doesn't give the impression it would apply to a specific game in the series. I've seen a few posts mistakenly using simcity, rather than using the correct game-specific tag like simcity-3000 or simcity-buildit.

I propose renaming simcity to either simcity-5 or simcity-2013 to make the distinction more clear.

The simcity tag should be a synonym for simcity-2013. That way, if they come out with a new title that they also want to call SimCity, we could just change the synonym.

sonic-the-hedgehog-2006 and tomb-raider-2013 are other examples of games where the tag name differs from the official name. Not to mention simcity-classic, which was named SimCity when it was released.

The reason for this is that if someone enters simcity and it turns into simcity-2013, then they know that they are doing the wrong thing if they meant simcity-3000 or simcity-buildit. And the suggestions will show the specific tags rather than the synonym. So people will have to manually type in the whole word rather than just enough to get the suggestion.

The simcity tag has been renamed to simcity-2013. 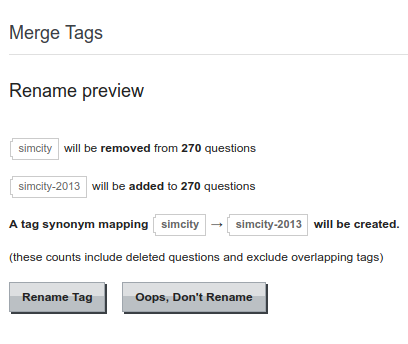 Ironically, it seems that simcity-2013 was already a synonym for simcity. It's just never been used before.

Thanks to badp for renaming the tag.

I don't think it should be renamed. Not that I wouldn't prefer it that way, but because officially the title is SimCity, and it's even like that in the Box Art.

We should be striving to make tags as clear as possible, and officially SimCity refers to SimCity (2013). What we can do is create a simcity-series if it's really needed to have an abragent tag.

Overall, I do believe that we should keep the same, because that's what the game is officially called.

Not the answer you're looking for? Browse other questions tagged discussion status-completed retag-request tag-rename-request .