Is it allowed to ask an automatically deleted question again?

A question of mine regarding difficulty settings in Deus Ex was deleted due to downvotes. The question wasn't against the rules, and in itself was worthwhile.
Is it allowed to resubmit a question that was deleted solely because of downvotes? 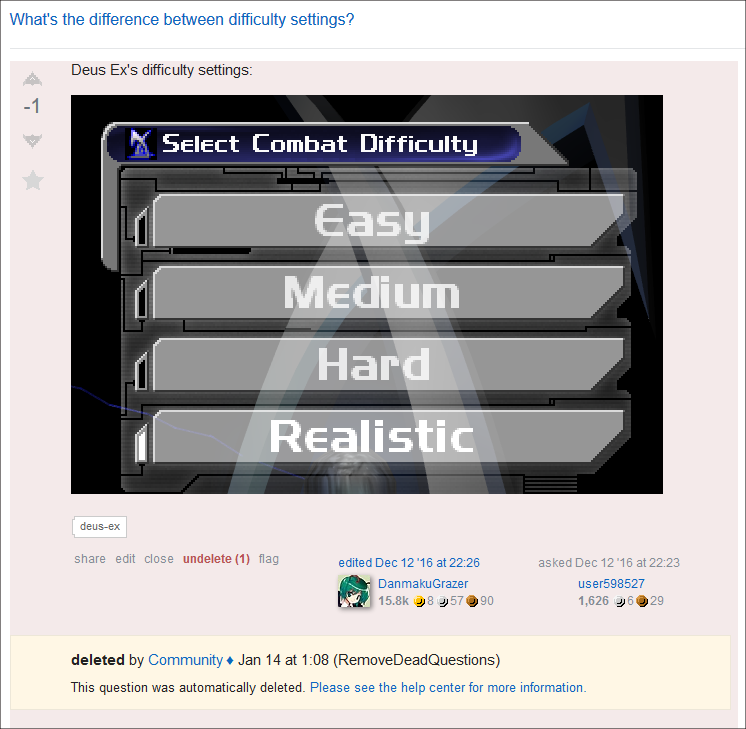 I found the question (Viewable to post owner, 10k users, and mods, as usual.). The problem with how you asked it the first time was that you really didn't ask much. You had the title, and then a screenshot of the difficulty settings, and that was it. While I understand that sometimes there's not a lot more to ask than what you have in the title, you really should make an effort to at least expand on it somewhat.

There's nothing stopping you from trying to ask it again, but there's also nothing stopping the community at large from treating it the same way if you make no effort to improve it, especially now that they're effectively aware of your plans to post the same thing again. (It's also then technically a duplicate, which we kinda frown upon.)

The more preferred course of action is for you to improve the current post and then vote to undelete it, but this does require 2 10K+ members of the community to also vote to undelete the post, so you're going to have to make very sure it's up to the Arqade community's standards if you're wanting to convince people it's worth that.

Not the answer you're looking for? Browse other questions tagged discussion deleted-questions .

1
'Sounds like a List question' = subjective votes?
3
Missing link on profile to view recently deleted questions
17
Should we be undeleting questions that weren't relevant at the time, but now are relevant again?
7
Are the rules or details of speedrunning specific games on topic?
1
How can I find a question deleted more than 60 days ago?