Why was my flag declined?

The comment is a Facebooky-comment at best. It is not constructive to the question, has no relevance to the question's contents, yet I've flagged this several times to be removed only to be rejected every single time.

If you declined my flag, could you at least help me understand what about this comment makes it so useful to the question?

IT WAS MEEEE (well, for one of the declines at least).

First, I think it's important to note that there were 4 extra comments there all boiling down to "Omg dis title" or variations thereof, which I deleted as per your other 4 flags: 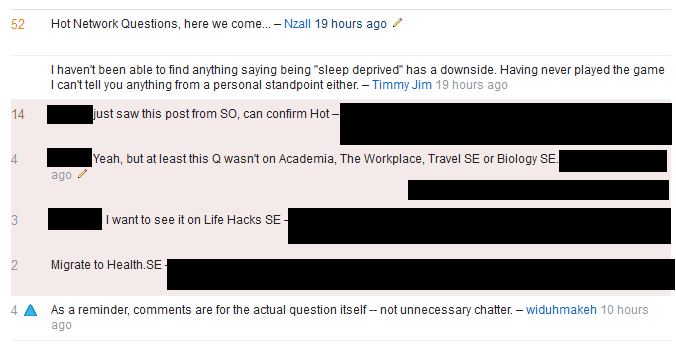 I agree that most of these sorts of comments aren't needed, (which is why I deleted the other 4 and only declined that one. But why keep one around? Well, two main reasons:

Sure, when we're reaching epic proportions of off-topic comments, it's worth it to purge them all, as per this meta:

Misleading question titles are great. They're kind of a thing around here and that's also great. What's not so great is every time one comes along, and we get dozens of comments about LOL, how amusing the title is...

Usually one or two is kinda okay, but recently every misleadingly titled question has attracted so many of these comments that the decision has increasingly been to remove them all.
- Hot Network Question Silly Title Comment Sanity

I didn't think 5 comments deserved a complete purge. Especially since we also had an on-topic comment, as well as your comment warning others not to post more.

So instead I deleted the four that were just responses to, (or repeating the sentiment of) the first. If we purged all comments it will probably still attract more, leading to more flags and therefore more work.

2. It's harmless, and acts as a signpost for others to upvote

It's a funny-worded question, on a recently-released game, attracting lots of views, and therefore has become a Hot Network Question. It's good for growth (attracting new users to the site) and helps to give a sense of what Arqade's community is like: hilarious and fun (well, mostly).

You did the right thing in flagging them*, let's make that clear. But (in my opinion) having one stick around isn't the end of the world.

* One thing that would help in future is if you see these kinds of comments, to flag the question (or answer) for mod attention, rather than the individual comments. Especially so if there are a lot of them - and even more especially if you've already gotten a decline on a comment-flag). We can't write a response to comment flags (leading to confusion and metas such as these).

Plus it saves you time flagging, it saves us time handling them, and it allows us to mark the flag helpful whilst not blanket-deleting everything

Not the answer you're looking for? Browse other questions tagged support .

69
Hot Network Question Silly Title Comment Sanity
-5
If there are effectively no restrictions on comments, the site's rules should be changed accordingly

6
Should we be allowing tags to be manually prepended to the title of questions?
4
How should I tag on gaming SE? (Are genre tags used?)
9
Conflicting flag messages around duplicate answers, how to proceed?
1
Is it appropriate to flag questions that should be protected?
7
Why was this offensive flag declined?
9
When should I flag an answer and what flag should I use?
3
VLQ flag declined
2
Why was my flag on a resolved duplicate comment declined?